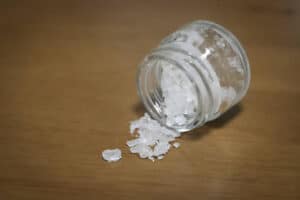 Flakka is the most recent synthetic compound that has alarmed the public health sector. This new designer drug called alpha-pyrrolidinopentiophenone (alpha-PVP) is a tweaked version of bath salts. According to the National Institute of Drug Abuse (NIDA), Flakka drug use is surging in Florida.

The drug takes on the form of a pink or white, nasty-smelling crystal that can be snorted, eaten, injected, or even vaporized in an e-cigarette. When vaporized, overdosing on the drug may happen as the drug quickly enters the bloodstream. It is so dosage-specific that even a minute amount will give the user his desired effect.

As alpha-PVP is a stimulant, a state of hyper-stimulation, hallucinations, and paranoia that could result in self-injury and violent aggression is possible. This drug has the combined effects of methamphetamine and cocaine without the price tag. A gram costs a mere $5.

In recent news, Flakka was behind a man stabbing and allegedly attempting to eat a Florida couple. This shocking behavior has been speculated as one of the harmful effects of using the substance.  Some have been known to show increased violent behavior, among other effects.

Flakka has been considered a controlled substance by the Drug Enforcement Administration since 2014.

A standard urine drug test kit does not detect synthetic cathinone found in alpha- pyrrolidinopentiophenone and in other bath salts. However, there is now quantitative testing for primary chemicals such as A-PVP, MDPV, DMAA, Methylone, Mephedrone, and Pentedrone. These urine drug tests are called a bath salt drug test kit or Novel Psychoactive Substances (NPS) urine drug test.

The cut-off for Alpha-PVP is 2.0 ng/ml and has a detection time of 1-3 days after drug consumption.

The United States Code (USC) Controlled Substance Act is the system followed and implemented by the Drug Enforcement Administration. There are five schedules of controlled substances labeled from 1-V, with the classification based on the pertaining drug’s medical applications, safety, and abuse potential.

In January 2014, Alpha-PVP was placed under Schedule I by emergency scheduling procedure in the United States.

What Type of Drug is Flakka?

Flakka is a very powerful psychoactive stimulant that is similar to MDPV and pyrovalerone. It is abused mostly for its euphoric effect, alertness, excitement, improved productivity, strength, and endurance. This compound has been available online as a recreational designer drug.

Flakka is often sold online as a crystalline rock. It comes in different forms and can be eaten, injected, smoked or snorted.

Powder – Crystalline Flakka bought online are often repacked in capsules for oral consumption. Its dosage is relatively unknown thus the probability of overdosing is high. When finely ground, it can be used for snorting for a more quick, concentrated, and direct rush. Very recently, gummy bears coated with finely ground Flakka that looked like sugar were made available.
Solution – When mixed with a liquid base such as dextrose, the drug can be directly injected into the vein. Liquid Flakka is also made available for vaporizer pens or e-cigarettes. Vaping makes the effects of Flakka worst for the user.
Flakka Forms and Routes of Administration

Flakka simulates the combined effects of methamphetamine and cocaine. Because it is 10x more potent than cocaine, is cheap and accessible online, this drug has become very popular among college-age adults. The euphoria affected by this drug is quite intense and getting off takes longer than cocaine or meth.

Flakka has the tendency to increase a user’s body temperature possibly to 104 degrees Celsius or higher. Spiked temperature can lead to kidney damage or failure which could ultimately lead to death. It can also elevate blood pressure which could lead to stroke, heart attack or heart failure, and aneurysm.

As Flakka mimics amphetamines or methamphetamines, and cocaine, short term effects are:

After the high comes a period of “comedown”, a state when Flakka leaves the body. When this happens, the user may feel extreme depression and fatigue, prompting the user to use the drug again to get rid of the negative comedown experience. Eventually, this practice can lead to drug abuse.

Though first synthesized in the 1960s, the use of Flakka in the United States as a recreational drug is fairly recent (2013). In connection, the long-term effects of this drug are yet to be published. One certainty though is that A-PVP is toxic to the kidneys, but its effects on the body and the brain in the long term are yet to be determined.

However, since Flakka mimics methamphetamine and cocaine, its long-term effects may rival the two mentioned illicit drugs.

The practice of jump-starting a cycle of Flakka used to counter negative comedowns will eventually lead to tolerance to the drug. This will eventually require the user to increase the dosage of the drug to experience the same “high”, thereby exposing the user to overdose, dangerous effects, drug dependence, and even death.

Flakka is addictive. Users reported that the drug causes intense cravings to use the drug again. Withdrawal symptoms of this illicit drug include:

There is a lack of scientific research on the long-term effects of Flakka. However, as a psychostimulant, this drug can cause paranoia, hyperstimulation, and hallucinations. There are news stories indicating the irrational behavior of people high on this drug. In combination with other drugs, A-PVP has been linked to overdoses and suicides. It was reported that the drug in combination with pentedrone, caused heart failure that led to death.

It follows that the risks in taking Flakka are considerably more so for people with diagnosed and undiagnosed mental and physical illnesses. Pregnant and lactating women are not to try this drug.

Flakka or A-PVP is a synthetic cathinone, a category under which the natural, mild, stimulant belongs. Chemical-wise, this chemical is a more powerful, next-generation bath salts.

A-PVP was patented in 1967. It has the molecular formula of C15H21NO, a cathinone that is structurally related to methylenedioxypyrovalerone (MDPV) and pyrovalerone. Both chemicals have been known to affect the body’s dopamine and norepinephrine level.
Flakka became available to the public in the United States in January 2013. By April 2013, the drug was mentioned in the Journal of Analytical Toxicology. By 2014, the drug was gaining so much popularity and was distributed as Flakka.

No one seems to know how A-PVP came to be called Flakka. Some say the name could be a variation of the Spanish slang word “la flaca” which means “skinny girl”. Some say the term is random and quite fittingly describes what a person high on this drug feels. A popular street name for A-PVP is “gravel” as the pink and white crystals look like those placed in fish aquariums.