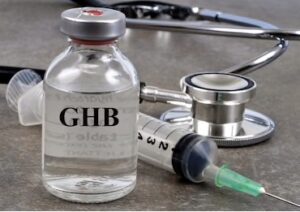 Contrary to popular belief, GHB (gamma-hydroxybutyrate) is not a newly-discovered designer drug.   GHB is actually a naturally occurring product of human metabolism. It is a carbohydrate found in abundance in our diet as it exists in animal meat as well as wine and small citrus fruits. It is also biologically synthesized from GABA (gamma-aminobutyric acid), an amino acid that is structurally similar to GHB.

When artificially synthesized, GHB takes the form of a clear liquid or a white, crystalline powder much like table salt. In the U.S., GHB is only available through a prescription from compounding pharmacies.

It is sometimes called “G” or “liquid ecstasy” and is popular among the party crowd at clubs or raves, who use it for its euphoric and sedative effects. Combined with free-flowing alcohol at these parties, GHB has become a major “weapon” against women (and sometimes even men) who unwittingly ingest GHB through their unattended drinks as it’s known as a dangerous date rape drug. The illicit recreational use of this drug in the United States has been steadily increasing since the mid-1990s, made possible by local production activities by underground laboratories.

GHB for non-medical use is classified under Schedule I of the Controlled Substances Act which lists drugs. When used as prescribed for therapeutic purposes (sodium oxybate), it is a Schedule III substance. Schedule I substances or chemicals are those that:

Drugs under this class are considered dangerous and no prescriptions may be written for them as they are for clinical use. Other examples of drugs that fall under Schedule I include:

GHB (gamma-hydroxybutyrate) is a CNS depressant. These drugs are also called “downers”, sedatives or tranquilizers. They slow down brain activity, inducing a state of relaxation. Depressants are prescribed for the treatment of anxiety and sleep disorders. The 3 major groups of depressants are benzodiazepines (Valium, Xanax), non-benzodiazepine sleep meds (Ambien, Lunesta, Sonata) and barbiturates (Luminal Sodium, Mebaral, Nembutal)

GHB is odorless and colorless but has a slight soapy or salty taste to it. It may be easily combined with alcohol and given to unsuspecting victims prior to being taken advantage of. It comes in the form of a tablet, capsule, white powder, or clear liquid that looks like water and sold in small vials.

All of these forms of GHB are administered orally, typically by dissolving or mixing into a drink. The powder form can also be snorted or dissolved in liquid and injected. GHB typically takes from 10-20 minutes to take effect, and depending on the dose, it can last up to 4 hours.

In the United States:

GHB occurs naturally in the central nervous system and peripheral tissue. It is also a minor metabolite and gamma-aminobutyric acid (GABA) precursor. Depending on the dose, it can alter dopamine activity in the brain:

At anesthetic doses, the drug will block the flow of impulses from dopamine neurons, causing them to build up in the nerve terminals.
Below anesthetic doses, dopamine neurons get excited and produce increased levels of synaptic dopamine.
GHB imitates the natural sleep state, enhances REM sleep, and increases stages 3 & 4 of slow-wave sleep.
With at least 3-gram doses, it causes an increase in growth hormones and the concentration of prolactin, which many bodybuilders believe is beneficial to them despite there being no actual evidence of body mass increase.

Long-term GHB use whether under medical supervision or recreational in nature can lead to the following symptoms:

When used repeatedly, GHB has a high addictive potential. Severe and incapacitating withdrawal effects may include:

There is little information available on treatment options for GHB addiction, as it is with other club drugs. However, the severe withdrawal symptoms upon detox typically require close medical supervision/hospitalization. Memory loss is a common complication of treatment, often resulting in relapse.

It was Russian chemist Alexander Zaytzev who first reported about the endogenous substance, gamma-hydroxybutyrate (GHB) but it wasn’t until the 1960’s that Dr. Henri Laborit actually began clinical research about it. In 1963 it was discovered that GHB occurs naturally in the human brain. Throughout the 1960s it was initially used as an anesthetic, as a treatment for alcohol withdrawal, and as an anti-ulcer agent. In Italy, France, and other European countries, GHB was widely used as an anesthetic in childbirth and as a sleeping agent.

In the 1970s, they began studying the use of GHB in the treatment of narcolepsy-associated cataplexy and hypersomnia and found it to be actually effective but for its euphoric side effects.

In the 1980s GHB began to be marketed as a muscle developer and fat burner, causing a spike in its popularity. Soon after, the risks of abuse began to surface and more than 30 documented reports of GHB-linked illnesses compelled the FDA to declare GHB unsafe and ordered its removal from store shelves, limiting access to it by non-medical users. In response to this ban, manufacturers turned to its precursors GBL and BD and sold them as sleep aids and muscle enhancers. It was around this time that GHB started earning its reputation as a party drug for its euphoric aphrodisiac effects. GHB abuse has escalated such that the FDA federally banned the drug in 2000 making it a Schedule I substance.

Still, further research into the drug showed how effective it truly was in producing significant and long-term improvements in cases of cataplexy and daytime sleepiness. This led to the 2002 FDA approval of the sodium salt form of GHB, sodium oxybate, for the treatment of narcolepsy with cataplexy. The brand name for this drug in the U.S. is Xyrem.

Why Choose Our Ghb Test Strips?

Our family-owned and operated business provide you with high-quality but lowest-priced drug test strips and cups.  Above all, we value integrity and compassionate service.

We also ship same-day on all transactions made before 5 pm EST to make sure you receive your order as quickly as possible.

Our company takes pride in providing the best drug testing supplies on the market and we make sure our customers feel appreciated and respected.

Can Ghb Cause Seizures?

Yes, GHB can cause seizures if you take it in high doses. The risk for seizures gets higher if you mix it in alcoholic beverages.