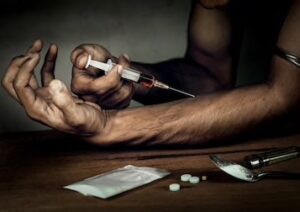 Heroin is an illegal, highly addictive, naturally occurring drug that is extracted and processed from the poppy plant. Poppy pods are scored to allow the white latex to drip out onto the surface of the pods, where it darkens upon oxidation and hardens overnight. It is then scraped off, collected, and set out to dry in the sun. This dried, raw opium is typically brown to black in color. There are 40 alkaloids present in opium which is approximately 21% morphine and 2.5% codeine, the 2 most important of the alkaloids.

The process of heroin production begins with 1) the purification of the raw opium to remove the alkaloids by boiling it in water. The alkaloids dissolve in the water and all solid impurities float to the surface where they are either scooped out or strained using cheesecloth or burlap. The purified liquid is reheated until all the water has evaporated to leave behind a thick, dark paste which is then dried in the sun. It is of a putty-like consistency. At this stage, the product is already usable (for smoking or eating) and may either be consumed locally or transported to larger-scale heroin manufacturing sites for 2) the next stage of the process where morphine will be extracted from the opium and purified.

The finished product at this stage is called the morphine base (morphine hydrochloride). The following stage 3) is the acetylation of morphine to convert it into heroin. By adding acetic anhydride to about 3x the amount of the morphine and heating the mixture to 85°C (not boiling) for about 5 hours, the morphine dissolves and the resulting solution contains water, acetic acid, and diacetylmorphine (heroin). It will be allowed to cool and processed further to get the heroin base. It should be white, granular powder at this stage. A kilogram of morphine should yield about 700 grams of heroin base.

Pure heroin is a bitter, white powder that comes into the United States mostly from South America and sometimes Southeast Asia. The heroin from these sources dominates the U.S. drug scene east of the Mississippi. Impure or “black tar” heroin either looks like roofing tar (sticky) or coal (hard). These kinds of heroin come into the United States mostly from Mexico and are sold west of the Mississippi. Black tar heroin comes from the impurities introduced by crude processing methods. Heroin sold in the streets is either white or light brown and is hardly ever pure, typically cut with starch, sugars, powdered milk, or quinine.

In the workplace, most employers follow the SAMHSA-5, which is the minimum standard list of drugs to test for under an Employee Drug Testing Program. The 5 categories of drugs included in the SAMHSA-5 are:

In drug screening, the cut-off level is the minimum amount of drug residue that must be found in the sample for the test to be positive. It is important to remember that a negative sample does not necessarily mean that it is drug-free, only that it contains a drug at a concentration that is below the established cut-off.

Heroin is classified under Schedule I of the Controlled Substances Act which lists drugs, substances, or chemicals that:

Drugs under this class are considered dangerous. Other examples of drugs that fall under Schedule I include:

Heroin is an opiate. Opiates are powerful painkillers. Opiates are chemicals derived from opium, a white liquid extract from the poppy plant that is the key ingredient in heroin. Opiates produce an intense feeling of pleasure and a sense of calm and well-being. Opiates are highly addictive and long-term use alters the way nerve cells communicate with one another. A high dose of opiates can cause cardiac or respiratory arrest, often resulting in death.

Heroin at its purest appears as the fine white powder. Impure heroin, which is most often the case, comes in varying colors depending on the degree of the impurity introduced during the manufacturing process. Sometimes the coloring is a result of the additives that were used to “cut” the finished product, like caffeine, white/brown sugar, and other substances. These colors range from off-white/beige to brown to black. There are not so common colors as well like gray, yellow or pink.

Pure heroin is either smoked or snorted and is preferred by new users as it spares them from the stigma and the added health risks from injecting drugs. On the other hand, impure heroin that usually ends up in the hands of impoverished users is usually dissolved and diluted before being injected intravenously, intramuscularly, or subcutaneously. The additives that impure heroin contains do not dissolve and end up clogging the blood vessels when injected into the body. This in itself can lead to serious infections and damage to vital organs like the kidneys, lungs, and brain.

While heroin isn’t normally referred to by brand name, there are actually stamps on the packaging they come in and below are only some examples.

In 1972, a team of researchers from Johns Hopkins University identified certain protein receptor areas for opiates (opium, codeine, morphine, and heroin) in the human brain. At about the same time, they also discovered that the human body manufactures its own endogenous opioids (endorphins, encephalin, dynorphin). Their findings helped pave the way towards understanding the effects of heroin on the human brain.

When opioids bind to their specific opiate receptor in the brain, they reduce the brain’s perception of pain while at the same time elevating a person’s mood by raising dopamine levels, the effects of which are more intense than those produced by the body’s own endorphins. When heroin is introduced into the system, the body is flooded with opioids and it results in levels of dopamine 10x higher than normal. Repeated/constant exposure to elevated dopamine levels builds resistance to heroin, pain thresholds go down and the person becomes more sensitive to pain. The person then needs more heroin just to feel normal again.

Over time, the pre-frontal cortex and medial temporal lobe suffer from some degradation. These areas are responsible for decision-making, long-term memory, complex thought, and control of social behavior.

Heroin’s most potent effect is on the brain’s reward system. Normally, the brain releases endorphins and dopamine to reward behavior that is needed for survival, like eating and coping with pain. When heroin is added into the system, it causes an overproduction of these “feel-good” or reward chemicals. The brain makes a correlation between heroin and the activation of these chemicals and once removed, the person finds he/she is unable to function without the drug.

Signs of addiction to heroin:

It all began with the poppy plant, the earliest mention of which was by the ancient Sumerians around 4000 BC. The Minoan civilization (3650 -1400 BC) was already describing their method for extracting the latex out of the poppy pods. It was the ancient Greeks however that first called this white latex opium, which for many centuries was the only real pain control drug available.

In the 16th century, opium came in the form of laudanum, developed by Swiss-German alchemist Paracelsus, but it remained generally unknown until the mid-17th century when English physician Thomas Sydenham compounded or prepared his own personalized/proprietary opium tincture and also called it laudanum. Sydenham promoted his laudanum for use in the treatment of a wide range of medical conditions.

In 1804, German chemist Friedrich Sertürner isolated morphine from the opium latex, naming it after the Greek God of dreams, Morpheus as his drug made people feel happy and made them sleep. Morphine was widely distributed by 1810 through German pharmaceutical giant Merck which was the first to commercially manufacture the drug. The invention of the hypodermic needle in 1857 made it possible for morphine to be administered to practically anyone, especially during the American Civil War (1861-1865). While morphine saves many lives, it also made addiction a new reality for many soldiers who became heavily dependent on it.

Heroin was finally synthesized from morphine in 1874 by C.R. Alder Wright in the UK by adding another chemical and boiling morphine for 2 hours. Realizing he stumbled on to something slightly different, he sent his newly discovered compound to be analyzed. They tested it on rabbits and dogs, noted how it made the animals sleepy, and promptly forgot about it. After 23 years, Bayer’s Felix Hoffman independently synthesized heroin while trying to produce codeine. Realizing that this new opium derivative is far more potent than morphine, Bayer began commercial-scale production of heroin in 1898 and pushed it as the drug of choice for the treatment of bronchitis, asthma, and tuberculosis.

Heroin worked well for this application because it is both a sedative and respiration depressor, so it allowed people the rest they needed from fits of coughing. Also, compared to codeine and morphine, heroin was advertised as non-addictive and was soon embraced by the medical community as an important medical breakthrough. It was made available mixed in cough syrups, as an elixir, in tablet form, in water-soluble heroin salts, etc. In just 1 year, it reached over 23 countries and Bayer is said to have produced 1 ton of heroin in that first year alone.

Just as quickly as it became known all over the world, reports of heroin addiction began coming out, and soon Bayer realized it simply replaced morphine addiction with heroin addiction. The company stopped producing heroin in 1913.

The use of heroin and morphine declined over the years and by 1945 was at a mere 10% of their previous usage levels. What remains is the persistent underground culture, despite the development of other opiates that replaced heroin and morphine, namely Oxycodone (1916), hydrocodone (1920), and hydromorphone (1924), and Methadone (1937).

Can I Purchase a Single Use Drug Test for Heroin?

12 Panel Now offers Drug Tests in Bulk, or for single use. If you are concerned about how someone will fare on a Drug Test, or simply wish to test yourself, it’s a fairly easy process taking only a few minutes.  Our Single Use 12 Panel Urine Drug Test tests for 12 commonly abused drugs, including Opiates.