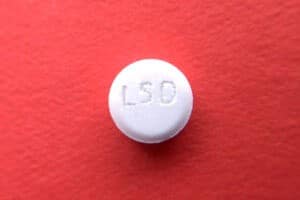 Here at 12 Panel Now, we are keenly aware of the effects of this hallucinogenic drug.  In recent years the use of psychedelic drugs has declined, however, the risks of prolonged usage still can cause lasting harm.  Many have been concerned about its appearance on routine drug tests.  For those who concerned about testing positive, it’s good to know how long LSD will stay in the system.

How Long Does LSD Remain in the Body?

Information from drugrehab.com provides an insight as to how long this hallucinogenic stays in the system.  Though everyone metabolizes differently, studies show that LSD remains in the body:

Will LSD Appear on a Drug Test?

Here at 12 Panel Now, we provide a variety of Drug Testing Supplies both in bulk and for Single Use.  Our most popular Drug Test, the 12 Panel Urine Drug Test Cup tests for 12 frequently used substances.  12 Panel Cups and various Urine Drug tests are the most commonly used Drug Tests among employers and law enforcement due to the simplicity, speed, and ease of use.

These Urine Drug Tests come in a variety of options, testing for many different kinds of substances.  LSD however, is not usually one of the substances included on these tests.  There are tests that specifically test for LSD and other Hallucinogenic substances.  If an employer or law enforcement wishes to conduct a specific drug test to screen for this substance, they may call for a Lab Test.   The metabolite of LSD,  2-oxo-3-hydroxy, is one of the components of LSD that these Labs will test for, indicating use.

LSD, molecular formula – C20H25N3OLSD is a Schedule 1 drug. It has not only a high potential for abuse but also the potential to create grave psychological and physical dependence.

LSD or lysergic acid diethylamide is a hallucinogen and is considered one of the most potent mood-changing chemicals. Lysergic acid is a naturally occurring substance found in ergot, a fungus that thrives on rye and other grains.

In the late 1940s, American researchers began using the drug in psychotherapy, to simulate mental illness as well as to treat alcoholism. By the late-1960’s, the ill-effects of LSD such as “flashbacks”, convulsions, homicidal impulses, and suicidal thoughts began to surface.

Unlike heroin, cocaine, amphetamine, alcohol, and nicotine, LSD does not produce compulsive drug-seeking behavior. However, psychological dependence on lysergic acid diethylamide is possible. Regular intake of the drug produces tolerance so that most habitual users progressively take larger doses to get “high”. United States law classifies LSD as a controlled substance.

In urine drug testing, cut-off levels are measured in Nanogram per milliliter (ng/ml). For LSD, the cut-off level is 0.5 ng/ml within a detection period of 1-5 days. The confirmatory cut-off level for said drug is 200pg/ml.

The DEA is the prime federal agency tasked to combat drug use, manufacture of drugs, drug trade, and drug smuggling in the United States. Under the Department of Justice, the DEA implements the Controlled Substance Act (CSA) of 1970 and persecutes violators. Under the CSA chemicals, substances, and drugs are classified into five schedules or categories based on the drug’s safety, medical use and dependency potential.

LSD is a Schedule 1 drug. It has not only a high potential for abuse but also the potential to create grave psychological and/or physical dependence. Schedule 1 substances have no acceptable medical or therapeutic use.

LSD is a hallucinogen. Also known as psychedelics, this drug alters one’s mood, thought, and perception when it is taken in small doses. If consumed in large doses, hallucinations and distortion of time and space could happen. The hallucinations, images, or sensations seem real to the user. Hallucinogens may also be found in some plants and mushrooms, or synthetically manufactured.

Ketamine forms and routes of administration examination come in capsules, tablets, and at times, in liquid form. Some users prefer to buy blotting paper that has been soaked in LSD. Divided into small squares, each blotting paper square is equivalent to one dose.

In its purest form, LSD is an odorless and colorless powder. It is usually sold in capsules, tablets, and at times, in liquid form. Some users prefer to buy blotting paper that has been soaked in LSD. Divided into small squares, each blotting paper square is equivalent to one dose. This drug is also available in thin gelatin squares and as sugar cubes.

This drug is abused orally, taken as a pill, or ingested in liquid form. However, there are some users who sniff, inject, or smoke LSD. Using this drug in combination with other drugs such as ecstasy or ice can increase the probability of a “bad trip”.

LSD Side Effects and Symptoms

The effects of LSD depend on the amount taken; the strength of the drug; the health, personality, mood, and expectations of the user; and the surrounding where the drug is used. Effects of LSD are felt after 30-45 minutes of taking it, lasting for 4 to 12 hours. The user experiences:

A psychedelic experience where the user’s thinking and perception are radically altered could be brought about by a large dose of LSD. A “trip” can give a user a “high” that could last for days, or make himself detach from reality. This experience is physically, emotionally, and mentally draining. “Flashbacks” could happen days after a psychedelic experience. The varying amounts present in one product and the generally high potency of LSD make it difficult to determine its effect.

Tolerance to the effects of LSD quickly develops. After taking the drug for three to four consecutive days, the desired effects are diminished. Normal tolerance will return after a short period of abstinence.

Though tolerance to LSD is indicated, it is not an addictive drug. However, psychological dependence may occur. Symptoms of LSD withdrawal include fatigue, cravings, irritability and diminished ability to experience pleasure.

Physical harm and death – The tiny dose used to experience an LSD trip is potent but below the toxic quantity. In this connection, fatally overdosing on LSD is a rarity. The danger lies in ingesting drugs with stimulant and hallucinogenic effects that are sold or mistaken for LSD. One such drug is DOB which could take 3 hours to take effect, thus the possibility of overdosing. People on LSD have a higher risk of injuries and accidents due to their lack of judgment and weird behavior. Psychedelics make users feel invincible- that they can fly and jump out of windows unscathed. The incidence of suicide attempts, suicides, and self-injuries of people with a history of mental illness have been linked to LSD effects. Run-in with authorities is also a possibility.

Psychological/ Mental Harm – Psychedelic crisis or a prolonged bad trip is rare but when it does happen, the effect is psychologically harmful and traumatic. An LSD trip cannot be stopped once it starts. If a person seems to be undergoing a psychedelic crisis, it is best to take him to a medical doctor for sedation to lessen the traumatic effects. Recovery from the psychedelic crisis is almost always assured. However, users with pre-existing or predisposition to mental health problems are at risk of relapses or lasting symptoms of their current conditions if they take LSD.
Hallucinogen Persisting Perception Disorder or HPPD –It is a rare yet potentially harmful LSD effect. HPPD is the re-appearance of some of the effects of a past LSD trip. “Flashback” usually occurs after a bad trip (hallucinogenic drug episode). HPPD could be long-lasting but partial and even complete recovery is possible weeks or months after.

Anxiety, depression, and other related mental health issues increase the incidence of psychological harm brought about by a psychedelic episode. People with psychotic conditions such as schizophrenia have an increased risk of a triggered psychotic episode due to the effects of LSD.

Pregnancy – Consumption of illegal drugs is unsafe for both the mother and the unborn child. A 1972 study (Sally Long) of 162 children of parents who took LSD before and/or during pregnancy showed that 7 of them developed limb defects that could be attributed to the intake of LSD. Another study (Jacobson et al) indicated the development of heart defects, sacral myelomeningocele, hydrocephalus, and various limb defects in such children. Speculation was that LSD could alter DNA that could result in cellular abnormalities.
Breastfeeding – Two facts about breast milk and drugs are: almost all drugs pass into human milk, and drugs pass into the bloodstream before they appear in the breastmilk. Nursing mothers who take LSD are most likely to pass the drug into their infants even in minute quantities.

There is evidence that LSD has been around and has affected mankind for centuries. Lysergic acid is a chemical produced by ergot fungus (Claviceps purpurea) that grows on rye and other species of grain. If an infected grain is eaten, violent physical reactions and strange behavior may be manifested. Ergot poisoning symptoms include hallucinations, delusions, vomiting, muscle spasms, and crawling sensations on the skin.

Research indicated that fungus on rye grain could have caused the bizarre behavior of Salem residents that ultimately led to the infamous witch trials and ensuing executions in 1691.

In 1938 Albert Hoffman, a Swiss chemist working in Sandoz Pharmaceutical synthesized LSD-25. He accidentally discovered the semi-synthetic ergot alkaloids derivative while looking for a stimulant for blood circulation. Five years later (1943) Hoffman accidentally exposed himself to LSD-25. He reported that for two hours, he saw “an uninterrupted stream of fantastic pictures, extraordinary shapes with an intense, kaleidoscope-like play of colors.”

Three days later, Hoffman intentionally took a rather large dose of LSD-25 which had frightening results that he asked his assistant to take him home on a bicycle. Among LSD advocates, April 18, 1943, is known as Bicycle Day.

Other researchers at Sandoz came to know of Hoffman’s research and also experimented with this drug in smaller dosages. Sandoz Chemical asked for volunteers to test the viability of this drug for psychiatric treatment.

Knowledge of LSD spread through publications in medical journals. The drug cannot be produced on a large scale until Eli Lilly pharmaceuticals found a method to grow ergot in tanks and developed a way to synthesize it.

LSD was widely used as a recreational drug in the 1960s and ’70s. It’s psychedelic or mind-altering effects allegedly led users to higher states of enlightenment and consciousness. Researches showed that taking the drug was psychologically risky and a “bad trip” may even trigger full-blown psychosis. In connection, research on potential medical and therapeutic uses of LSD was discontinued and the drug was deemed illegal.

Does LSD show up on a drug test for probation

Courts now implement drug testing programs to ensure their clients are staying away from drugs. They test for different types of drugs, including LSD.

So yes, LSD will show up on a drug test for probation.

Does lsd show up on a 5 panel drug test?

No, a 5-panel drug test cannot detect LSD. It only tests for commonly abused substances, such as Amphetamines, Opiates, THC, PCP, and Cocaine.

To clarify, LSD doesn’t fall under any of the above-mentioned categories because it’s a hallucinogen.

Does LSD show up on a drug test?

Yes, LSD shows up on a drug test. It can be detected by an LSD test strip.

Is LSD a hallucinogen?

Yes, it is. LSD is one of the most powerful mind-altering substance. It comes from fungi that grow in rye and other grains.

Additionally, people who use LSD experience any of the two “trips” – the good and the bad.

When a person has a good trip, he sees bright, beautiful colors, and may even see inanimate objects come to life.

A bad trip, on the other hand, makes a person feel the opposite.