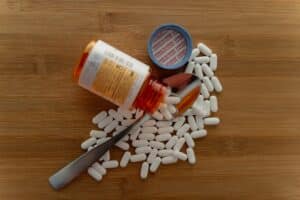 Propoxyphene is considered a narcotic pain reliever and cough suppressant. It triggers the narcotic (opioid) receptors in the brain but it is weaker than hydrocodone, oxycodone, codeine, and morphine. The drug, more commonly known as Darvon and Darvocet is used to relieve mild to moderate pain.

Propoxyphene or Dextropropoxyphene was FDA approved in August 1957. This prescription drug was used for purposes other than those listed by the manufacturer. In addition to addressing pain reduction, it also causes respiratory depression and sedation. Propoxyphene enhances drugs that slow brain functions such as barbiturates, alcohol, benzodiazepine sedatives, and skeletal muscle relaxants.

The United States sponsored clinical trial indicated that the use of propoxyphene, a controlled drug, increases the risk of developing serious heart rhythm abnormalities that could be fatal. A separate clinical study done in the UK and EU indicated that propoxyphene increases the risk of suicides and fatal overdosing. In 2009, propoxyphene was banned in the UK and the EU. In 2010, the United States followed suit and recalled the drug.

The Drug Enforcement Administration (DEA) in the United States federal agency in charge of drug-related trade, production, smuggling, use, and abuse. It is the regulatory and implementing body of the 1970 Controlled Substance Act (CSA). There are five categories and schedules of substances, chemicals, and drugs based on their medical use, safety and potential for abuse, based on CSA.

Propoxyphene is a Schedule IV drug. According to the CSA, drugs under this category have a low potential for abuse compared to Schedule III drugs. Drugs under this schedule are used for medical treatment in the United States, though Propoxphene is now banned for medical use. Abuse of such drugs could lead to psychological or physical dependence.

Propoxyphene is an opioid or narcotic pain reliever. It is medically used for the treatment of mild to moderate pain. Taking this medication does not necessarily stop the pain but more on the reduction of pain, and increased tolerance to pain. This drug also induces drowsiness. Banned for medical purposes by the FDA in 2010, propoxyphene is found to causes arrhythmia.

Propoxyphene is available in the form of:

The drug is available in two doses: 65 mg oral capsule of propoxyphene hydrochloride; and 100 mg oral tablet of propoxyphene napsylate. The dose is taken every four hours.

Doctor’s prescription is based on:

The following drugs are contraindicated with propoxyphene:

As this drug falls under the opioids group, Propoxyphene is a narcotic pain killer or analgesic and therefore medically used to relieve mild to medium pain. It is a weak opioid but is known to cause dependency among recreational users. This drug is not recommended with the poor genotype of the liver.

Dextropropoxyphene has used to relieve restless legs syndrome. In its purest form, this drug has been used to alleviate or ease withdrawal symptoms of opioid addicts. The effect may not be that much as mental cravings are not totally eliminated. However, physical withdrawal symptoms are alleviated.

Propoxyphene Side Effects and Symptoms

This drug has a slightly sedating effect that it is never advised to take propoxyphene with another sedative or antidepressant drug. In combination with alcohol, the effects of this drug can be dangerous and even fatal. Even food laced with alcohol cannot be taken with Propoxyphene.

Opioids such as propoxyphene are susceptible to abuse as one’s system can easily build a tolerance to them. When a user’s body gets used to the usual dose of this drug, he needs to get a higher dose to control his pain. For recreational users, a higher dose is required to attain the sedative and euphoric effects of the drug. As one’s tolerance builds up, psychological dependence on the drug develops. Eventually, the physical dependence on the drug develops.

If propoxyphene dependence arises, it is not wise to go cold turkey in managing the addiction. The right approach is to consult with a qualified doctor or drug abuse rehabilitation center for the correct withdrawal program. Some of the more obvious symptoms of propoxyphene withdrawal are:

People with a history of suicidal actions and thoughts must not use propoxyphene. It should not be taken with sedatives such as Xanax or Valium, or antidepressant, or with a large quantity of alcohol. Propoxyphene is addictive and should be used only under a doctor’s prescription.

Patients prescribed with Propoxyphene must not have: Liver or kidney disease Asthma, sleep apnea, COPD, and other breathing disorders No history of a brain tumor or head injury No history of alcohol or drug addiction No history of mental illness

Patients prescribed with Propoxyphene must not have:

Based on the provisions of the United States 1938 Food, Drug & Cosmetic Act (FD&C Act), Propoxyphene, invented by Eli Lilly & Co, was approved for the treatment of mild to moderate pain in 1957. The two most popular brands of this drug are Darvocet and Darvon, with the former mixed with acetaminophen. This drug is in the top 25 list of the most prescribed drug in the United States before its withdrawal from the legitimate drug marketplace.

The consumer group Public Citizen asked for the removal of all propoxyphene-based pain relievers from the market in 1978 because of its addictive properties, and ease of overdosing on the drug. The petition was denied. The second petition came in 2006 but it wasn’t until 2010 that the FDA withdrew the drug and its variants from the market. The drug has left millions of users with cardiac problems and negative side effects.

Is Propoxyphene an Opiate?

No, propoxyphene is not an opiate. It is an opioid.

Opiates like opium, codeine, and morphine are naturally derived from poppy plants. On the other hand, opioids are synthetic or partly synthetic substances.

How Long Does Propoxyphene Stay in Your System?

The propoxyphene detection period of 6 hours to 2 days. The accepted confirmatory cut-off level for propoxyphene is 200ng/ml.

What Does PPX Mean on a Drug Test?

On a drug test, PPX stands for propoxyphene, an opioid pain reliever, and cough suppressant.