Home » Blog » Fentanyl – What You Need to Know
Blog

Fentanyl – What You Need to Know

Fentanyl Abuse today is one of the most polarizing topics regarding modern-day drug abuse.

In an era where it is becoming increasingly easier to obtain illegal substances. Fentanyl has recently taken the lead as the number one drug involved in synthetic opioid overdose deaths.

How can this man-made opioid, go from a pharmaceutical pain reliever to a amusive drug, taking thousands of lives yearly?

Pharmaceutical Fentanyl has its applications, currently still being used in medical facilities to manage severe pain as well as in end-of-life palliative care.  It has also been used as an anesthetic. It can be injected into the patient, and it is available as a Nasal Spray. There are also transdermal Patches that can be Assigned as well.

When it comes to breakthrough pain or severe pain that erupts while a patient is already medicated with a painkiller, Fentanyl can act as a significant pain reliever alongside a patient’s pre-existing pain medication.

Most Fentanyl-Related Deaths from Non-Medical Use

Prescribed Pharmaceutical Fentanyl is not the number one factor amongst those who have passed away from synthetic opioid-related overdoses.  As it happens, the street drugs obtained by recreational drug users can contain a variety of mixed medications resulting in untold complications.

It’s for this reason that Non-Medical Fentanyl has made its way into the hands of users, with disastrous results.  Moreover, as Fentanyl is up to 100 times stronger than Morphine, unmonitored usage can undoubtedly result in misuse of the substance as well as addiction.

According to CDC.gov, Non-Medical Fentanyl is sold through illegal drug markets for its heroin-like effect. It is often mixed with heroin and/or cocaine as a combination product—with or without. The user’s knowledge—to increase its euphoric effects.

What are the Side Effects of Fentanyl?

Like heroin and morphine, Fentanyl binds to the receptors in the brain. That control pain and emotions, increasing dopamine levels within the central nervous system. When someone uses Non-Pharmaceutical Fentanyl or using Fentanyl unsupervised. The sensitivity within the brain is diminished making it difficult for someone to feel pleasure from anything else other than the drug.

Even under supervision from medical professionals, there can be severe side effects that many patients may experience.  Some of these include: drowsiness, confusion, slowed respiratory function, constricted pupils, weakness, profuse sweating and more.  As is true with many opiates, there’s always a risk of dependency, and patients can receive withdrawal symptoms that may include: insomnia, agitation, anxiety and more.  According to MedicalNewsToday.com, the withdrawal effects can occur within 12 hours of the last dose and can last for up to one week thereafter.

Again, because of the potency of Fentanyl, using it just once can sadly result in accidental death.  This is why it’s important for individuals who have prescriptions to make certain that their dosage is not accessible to anyone else.  Fentanyl is the number one synthetic-opioid that most overdoses have been linked to. What are the symptoms of overdosing on Fentanyl? Some symptoms include slow heartbeat, shallow breathing, trouble waking up or talking, unresponsiveness and more.

Can Touching Fentanyl Harm Me?

As this is an extremely potent drug, the effects can be quite severe.  Some news reports in the past have reported that first responders have gotten ill simply by coming into physical contact with the substance.  As frightening as this may be, in its guide to emergency responders, the American College of Medical Toxicology (ACMT) and American Academy of Clinical Toxicology (AACT) comments:

“… for opioid toxicity to occur, the drug must enter the blood and brain from the environment.” For this to happen, the drug would need to be absorbed by a mucous membrane (such as the nasal passages), inhaled, ingested or delivered by a syringe. Fentanyl can also enter a person’s system therapeutically through dermal patches, but it takes several hours to absorb.”

They further conclude that it is unlikely that small unintentional. Skin exposure could cause opioid toxicity based on the current understanding of the absorption of Fentanyl.  Of course, if anyone is symptomatic regarding any exposure to fentanyl, it is highly recommended to seek medical attention immediately.

Test Yourself or Someone Else

Fentanyl has been making headlines worldwide – especially within the past five years.  Outside of its medical use and positive applications in modern-day medicine, non -pharmaceutical Fentanyl, or Fentanyl Street Drugs. That have been cut with other opioids, have been made more accessible to the public. Also contribute to the crisis of mass overdosing deaths.

Employers have been concerned with the effects of opioids like Fentanyl, and the process of screening. Drug testing both potential and current employees have been widely practiced.  What’s the easiest way to effectively test for Fentanyl use? 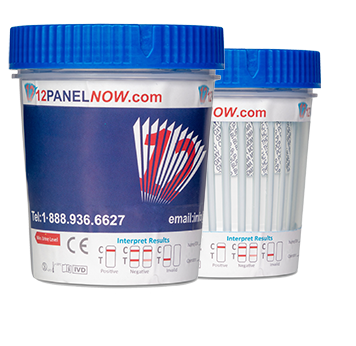 Whether you intend to test yourself or test a potential candidate for employment, the fastest most convenient method of drug testing would be utilizing a Drug Testing Cup.  The process is fairly simple and easy, for both the donor and the evaluator. The containers from 12 Panel Now have a waterproof lid, that keeps everything hygienically sound. The Drug Test Strips are implied within the cup and are easy to evaluate.  After the test is taken, simply remove the peel-away label to reveal the test results. The 13 Panel Urine Drug Test Cup tests for a variety of substances as well as Fentanyl. Other drugs include THC, Barbiturates, Cocaine, Ecstasy, and more.

Many appreciate how fast Drug Testing Cups can display results.  Drug Testing Cups from 12 Panel Now show accurate results in as little as 5 minutes.  If you are evaluating these Drug Tests, keep in mind that it’s advised to evaluate the test results within 5 minutes of taking the test.  It is recommended that you not evaluate the drug test after 10 minutes.

NewerWhat Is a 12 Panel Drug Test?
Back to list
OlderWill Vaping Cause Me to Fail a Drug Test?