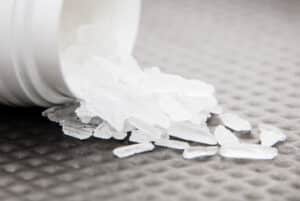 Methamphetamine is a highly addictive and powerful stimulant that impacts the central nervous system. Known by its street names like crystal and ice, this drug is a bitter-tasting, odorless, white crystalline powder that is water and alcohol soluble.

Developed from amphetamines in the early 20th century, this drug was used in bronchial inhalers and nasal decongestants. Though both drugs act as stimulants, Methamphetamine is more potent as its adverse effects are longer-lasting and greatly affect the user’s brain.

Methamphetamine is a controlled substance in the United States. However, it can be legally obtained through a non-refillable prescription. The drug, in far lower doses taken by abusers, has been specified for the treatment of attention deficit disorder (ADHD) and in weight-loss treatments.

The initial screening cut-off level for Methamphetamine is 100ng/ml. Detection time for single use is up to 48 hours, and for long-term use is from 7 to 10 days.

If the initial test is positive, a confirmation test is required. The cut-off level for meth is at this point 500ng/ml.

The Drug Enforcement Administration adheres to the United States Code (USC) Controlled Substance Act. Under this code are five schedules of controlled substances labeled as schedules I, II, III, IV, and V. The schedule of drug classification is based on the medical applications, safety, and abuse potential of the drug.

Methamphetamine falls under Schedule II, which are drugs and substances that have a high potential for abuse; are currently acceptable in the United States for medical use with severe restrictions; and abuse of which may lead to severe physical or psychological dependence.

What Kind of Drug is Methamphetamine?

Methamphetamine is a powerful stimulant that targets the central nervous system. Its chemical breakdown is C 10 H 15 N and affects chemicals in the nerves and brain that influence impulse and hyperactivity control. This drug type increases energy, alertness, and attention, as well as elevated heart rate, blood pressure, and respiration.

Methamphetamine comes in various forms and can be taken orally, injected, snorted, or smoked. The “high” experienced by the user depends on how the drug was taken.

Tablet Form – Methamphetamine Hydrochloride or the brand Desoxyn is taken orally. This is a medically prescribed drug for the treatment of ADHD and obesity. When orally ingested, the effect is felt after 10-12 minutes.

Powder Form – “Crank” refers to fine, coarse, or chunks of meth powder. This yellow or off-white powder is supplied loose and wrapped in foil or a plastic bag, or in capsules. When snorted, the effect is felt in less than 5 minutes.

Crystal Form – This type of meth resembles frozen water, thus the term “ice”. This crystallized meth can be smoked in a glass pipe. The odorless smoke leaves a residue that can be re-smoked. The effect may last up to 12 hours.

Yaba – This is a combination of meth and caffeine made available in multi-colored and multi-shaped tablets that taste like grape, vanilla, or orange, much like candies. Yaba tablets are highly popular in rave and techno parties. Some choose to snort Yaba by placing it on aluminum foil and heating it.

This drug type has been used to treat respiratory problems, asthma, neurological disorders, obesity, and other diseases. As its potential for abuse and dependence became evident, the medical use of methamphetamine has been strictly limited to the treatment of ADHD, depression, and narcolepsy.

Methamphetamine changes the number of particular substances in the brain in treating ADHD. It helps increase one’s ability to stay focused and pay attention to an activity, improve the capacity to listen and organize tasks.

Doctors have prescribed this medication to help obese people lose weight as it decreases a person’s appetite. However, drug use must be for a short time in patients who are on a reduced-calorie diet, and who have not significantly lost weight with other treatments.

Methamphetamine is not to be used to treat fatigue or to keep people without sleep disorders from falling asleep.

Methamphetamine must only be taken under the direction of a qualified medical doctor. People who used MAO inhibitors such as tranylcypromine, selegiline, phenelzine, rasagiline, linezolid, and isocarboxazid, in the last 14 days must not use methamphetamine.

People must inform their doctor if they have the above-mentioned conditions. If the patient’s family has a history of the following conditions, informing their doctors is a must:

Children below 6 years old are not approved to take methamphetamine. Children under 12 years old are not approved to take this drug to treat obesity. There is no research or study that supports the theory that taking meth during pregnancy will harm the unborn baby. However, doing so can cause not only premature birth and low birth weight but withdrawal symptoms in the newborn baby. Methamphetamine or any other drug can pass into breast milk, thus harming the nursing baby.

Methamphetamine is a potent stimulant that even if taken in small doses can increase one’s physical activity, wakefulness, and decrease appetite. Meth can also cause a range of cardiovascular ailments such as increased blood pressure, rapid heart rate, and irregular heartbeat.

Symptoms of Use and Abuse

Traces of methamphetamine may be indicated if one finds a small pouch of white crystals or powder with syringes. Some meth abusers may leave behind small, crumpled pieces of aluminum foil, small shafts or empty ballpoint pens that could be used for snorting, or soda can punch with a hole at the side.

Coming down or “crash” after use can be unpleasant for the user. To avoid this crash, most go for a meth “run” wherein they take another dose of meth for continuous high. This could lead to serious or even fatal results.

Regular use of methamphetamine

will ultimately affect the central nervous system and the brain of the user. This will lead to:

Methamphetamine may not be the most abused drug in most countries but it is certainly the most destructive and addictive one.

He may be alleviating feelings of loneliness, stress, anxiety, or inadequacy by taking the drug. This is psychological dependence.

Physical dependence is manifested as a compelling craving for the drug and by the demonstration of withdrawal symptoms when the use of the particular drug is stopped.

History of Methamphetamine
Methamphetamine is chemically similar to amphetamine but more potent and easier to manufacture. Amphetamine was first synthesized in Germany in 1887 while Meth was developed in Japan in 1919. As it is water-soluble, this drug is highly injectable.

Meth was highly used by military combatants of the Allied and Axis forces during WWII to keep them awake. Japanese Kamikaze pilots were given high doses of this drug before a suicide mission. The use of injectable methamphetamine became rampant after the war when the military supply of this drug became accessible to the Japanese civilians.

Methamphetamine became the wonder drug of the 1950s. It was prescribed for weight reduction purposes and mental disorders such as depression. Its availability made this drug a popular choice among athletes, truck drivers, and college students as a non-medical stimulant. Thus abuse of meth spread in the 1960s.
By the 1970s the United States Federal government made it illegal to use methamphetamine. At about this time, the production and distribution of the drug were controlled by motorcycle gangs across the US. Meth became the poor man’s cocaine.

Mexican drug cartels set up large laboratories in California in the 1990s. At the same time, small home labs proliferated across the US, spreading into Europe. Currently, this drug is mostly manufactured in Thailand, Myanmar, and China.

Is Ritalin a Methamphetamine?

No, Ritalin is the brand name for methylphenidate. It is a stimulant drug prescribed to treat ADHD. Thus, it  is similar to amphetamines.

Will Adderall Test Positive for Methamphetamine?

Yes, any test that detects stimulants similar to amphetamines will reveal the presence of a drug like Adderall.

Read More Here: Will Ritalin or Adderall Show up on a Drug Test Kit?

What is the Difference Between Amphetamine and Methamphetamine?

An amphetamine is a prescription drug stimulant that is similar to methamphetamine. Both create a ‘high’ or a feeling of euphoria.

However, meth is illegal. It works much faster in the brain than methamphetamine. Thus, users prefer the former to get the ‘high’ feeling more quickly.

What Can Cause a Positive Drug Test for Methamphetamine?

Many substances can cause false-positive results for a methamphetamine drug test.

Below are the agents with potential to cause false positives in immunoassay.

Does Zantac show up as methamphetamine?

Yes, Zantac or ranitidine can show up as methamphetamine. Moreover, it is one of the agents that can cause a false-positive result in a urine drug test.

Can you overdose on methamphetamine?

Yes, you can overdose on meth. In fact, approximately 15 percent of all drug overdose deaths in 2017 involved the methamphetamine category.

Additionally, some drug dealers add cheap, dangerous synthetic opioids to street methamphetamine without the user’s knowledge. This can have fatal consequences.

How long does methamphetamine stay in your body?

The initial screening cut-off level for Methamphetamine is 100ng/ml. Detection time for single use is up to 48 hours. However, it is detectable from 7 to 10 days on long-term meth users.

How do you test for methamphetamine?

You can test for meth using drug test cups with 8 panels and above. Additionally, you can use dip cards, oral swabs or a MET drug test strip.