Drug testing is an important part of all detox drug and alcohol rehab facilities before they can begin treatment. Withdrawal symptoms can vary depending on the substance that was abused, and specific medications are needed to help manage them.

Testing patients is a common procedure for detox facilities, so they should purchase drug tests in bulk to save money and ensure they’re well supplied.

12 Panel Now offers a wide variety of urine drug tests suitable for both drug and alcohol detox facilities. Our options range from smaller five-panel drug tests that cover some of the more serious drugs to much more comprehensive 18-panel tests.

Amphetamines are one of the only drugs completely covered by all of the tests on 12panelnow.com, and for good reason. This drug is well known for treating ADHD and narcolepsy. However, they’re also extremely addictive and have a history of abuse.

You can find them in any of the tests, including the five-panel urine drug test.

Drugs classified as barbiturates can induce sleep and decrease anxiety. However, the dosage is difficult to predict and can often lead to an accidental overdose.

Thirteen of the fifteen tests suitable for a drug detox clinic currently test for barbiturates. The detection time is between one to four days.

Benzodiazepines, more colloquially known as “benzos”, work as depressants to treat anxiety, insomnia, and seizures. Despite their benefits, benzos are highly addictive and easily abused.

Ten different drug test cups are available for purchase. They cover a minimum of twelve different tests, and the detection time is between one to two days.

Buprenorphine is an opioid that treats pain as well as addiction to narcotics. However, it is also addictive and can cause respiratory issues when taken in high doses.

Like amphetamines, buprenorphine is detected by all the available drug tests for drug and alcohol detox centers. Its detection time is two to six days.

Cocaine is another drug detected by every drug test cup. Detection time is two to four days.

It’s especially important to track cocaine withdrawal symptoms, as they can prove especially severe. In rare cases, it can present as hostility and paranoia.

Ecstasy, or MDMA, rarely causes fatal overdoses but can cause high blood pressure, faintness, and seizures. Heavy MDMA over extended periods of time is also associated with decreased cognitive function.

A cup drug test can take two to four days to detect its presence, and eleven options test for it.

Pharmaceutical fentanyl is used to treat cases of severe pain. It’s most often prescribed for advanced cancer pain, and it’s over 50 times more potent than morphine. Fentanyl is highly addictive and can cause respiratory distress in high doses.

12 Panel Now has six drug test cups that screen for it, and they can detect use for up to three days.

Generally speaking, marijuana isn’t as harmful or addictive as other substances. However, THC use can result in mood changes and impaired memory.

Twelve of the drug test cups available on our website can detect marijuana use. However, it isn’t a rapid drug test. Detection times are usually over five days.

The CDC attributes around 5,000 deaths each year to methadone overdose, and withdrawal symptoms include nausea, muscle aches, and hallucinations.

Eleven different tests are available for detox facilities, and detection time ranges from one to three days.

Methamphetamines, also known as meth, are a substance well-known for their addictive properties. They do in fact have a medical function as a stimulant to speed up your body’s system and can help treat ADHD and obesity, though.

12panelnow.com has twelve tests for methamphetamines, and they can detect traces of use for up to two to four days.

Opiates have a varying lifetime in the body depending on different factors, such as the amount taken, a person’s weight, and age. It usually takes five half-lives to remove a drug from the body.

In more specific terms, people who have taken opiates in the last 90 days can fail a hair test. Within 24 hours, they can fail a saliva test and a blood test. Urine tests are accurate for up to three days.

Every one of our tests can detect opiates of some kind, such as morphine.

Oxy is another drug that is tested for in each of our drug test cups. Although it’s used to treat pain and requires a prescription, it’s also highly addictive.

Drug use can be detected for up to three days afterward.

Phencyclidine, or PCP, is a strictly illegal street drug that can be inhaled or shot up. It functions as a hallucinogen that can result in violent behaviors, increased heart rate, and memory loss.

Our 12-panel drug test cup for detox facilities has a 99 percent accuracy rate and does not require a lab. They are CLIA waived and FDS approved POC urinalysis tests.

Results are available within a few minutes, and there’s also a built-in temperature strip to authenticate a donor’s urine.

Drug test cups are available with special wholesale pricing if bought in bulk.

12PanelNow reviews on Amazon and other review sites are consistently positive, due to their affordability and accuracy. Detox facilities and rehab centers will benefit from our tests’ comprehensive coverage of up to 18 different drugs.

Alternatively, you could always go for the more affordable options that cover only the most abused drugs such as oxycodone and cocaine.

Feel free to contact us if you have any questions, and take a look at our full list of drug tests if you want to see our other options. 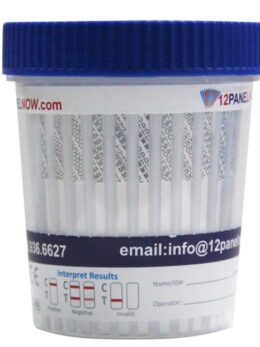 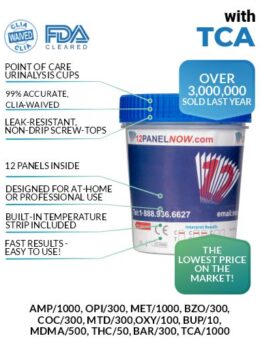 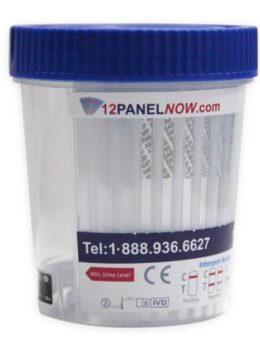 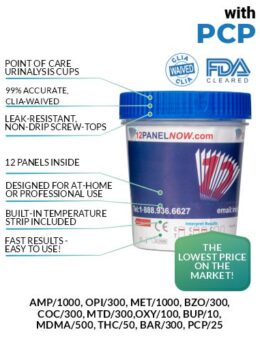 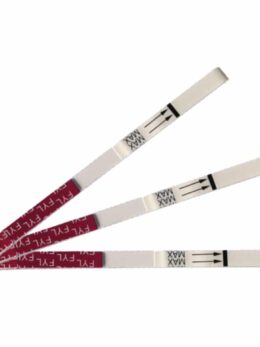 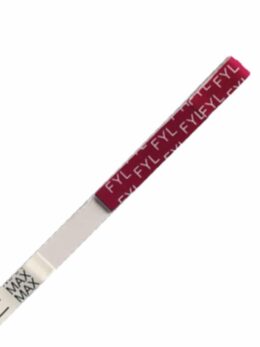 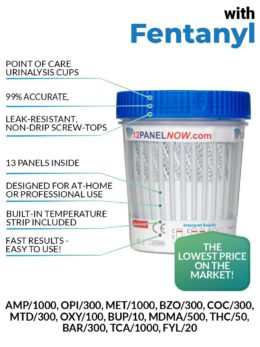 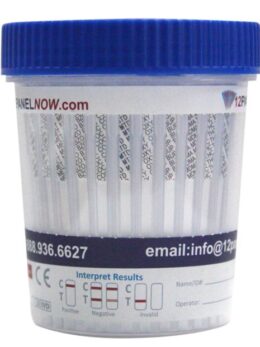 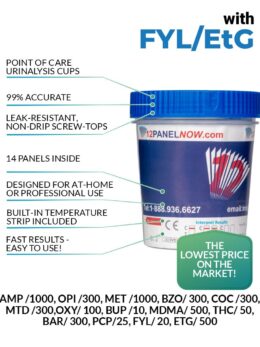 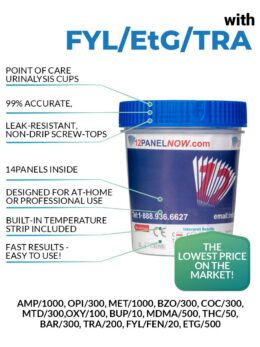 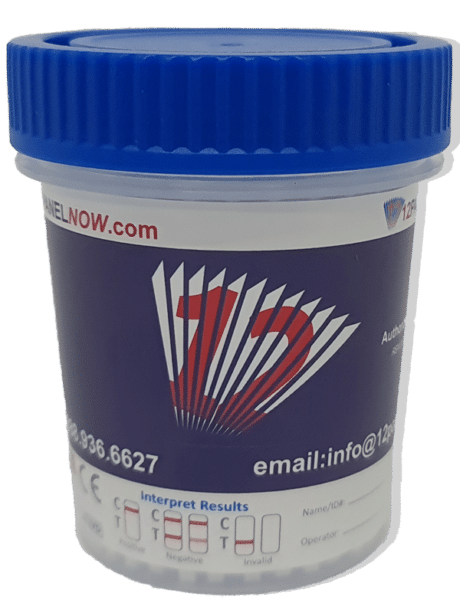 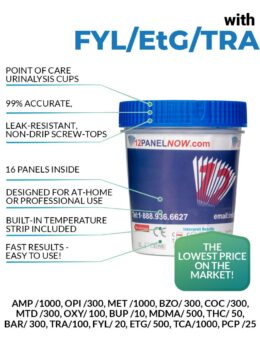 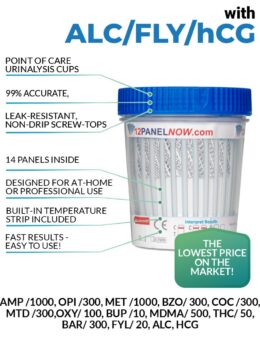 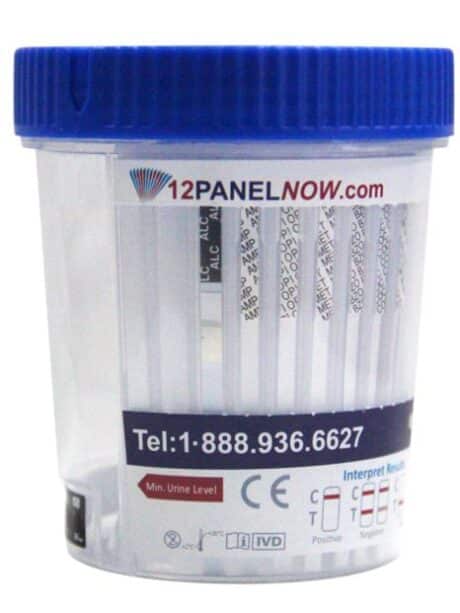 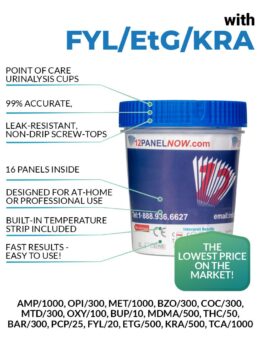 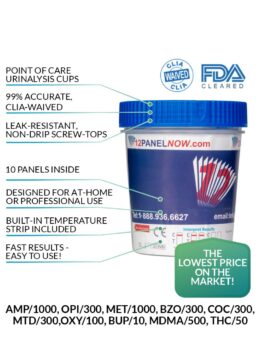 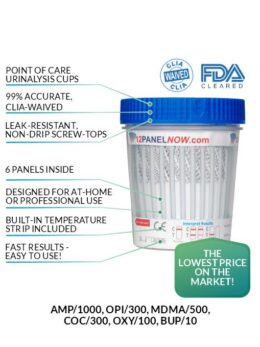