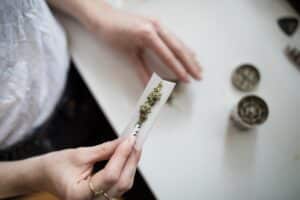 Simply put, synthetic marijuana is a questionable (at best) concoction of man-made psychoactive chemicals sprayed on dried plant material. These psychoactive chemicals are meant to mimic the effects of THC, the active ingredient found in real marijuana. Often referred to as “fake weed”, synthetic marijuana is sold in $30-$50 foil packets and is easy enough to find in gas stations, smoke shops, or convenience stores.

Marketed as a “safe” alternative to marijuana which is a Schedule I drug under the Controlled Substances Act, these things have successfully avoided regulation by simply being labeled “Not Safe for Human Consumption”. Synthetic marijuana is far from safe. They are actually more powerful than the real thing – with severe and unpredictable side effects that are dangerous and sometimes life-threatening.

Synthetic marijuana is classified under Schedule I of the Controlled Substances Act which lists drugs, substances, or chemicals that have a high potential for abuse with no current medical use. Examples of other drugs in this class are:

Synthetic marijuana is a stimulant. While natural marijuana is classified as a mild hallucinogen-depressant and depending on a person’s response to it, synthetic marijuana without question is an exceptionally powerful stimulant with serious and often severe side effects because of its largely unknown composition of dangerous and unstable chemicals.

Smoking – the herbal incense or potpourri version of synthetic marijuana is smoked by using a pipe or other devices. Many people also roll it into a joint but some sites advise against doing it this way and instead recommend simply using an incense burner.

Vaping – for liquid Spice/K2, there are two main techniques of vaping – mouth-to-lung (MTL) and direct-lung-inhale (DLI).

MTL is much the same as smoking a cigarette or sucking on a straw and letting the mouth fill with vapor. This technique makes use of tanks, preferably with high-ohm coils. The slow inhalation vaporizes the e-liquid slower, making the e-juice last longer.

DLI is much like taking a hit from a bong or shisha pipe. This technique draws the vapor straight down to the lungs and requires sub-ohm tanks.

With a Schedule I classification, synthetic marijuana has no useful medical applications and its only known “uses” are those that recreational users seek to experience. So, what are some of the reasons people use it?

Lack of social skills – many young people feel awkward in social situations and use “chemically-induced courage” to cope. As Spice and/or K2 are readily available, many teens end up using them.
Low self-esteem – people with poor self-image sometimes make do with a few hours of “feel-good” vibes about themselves by taking drugs, and again Spice is so easy to get.
Peer pressure – Spice/K2 in general, is very accessible to adolescents, and the need to be accepted into certain circles is often a compelling enough reason for these kids to try using it for the first time and to keep on using it afterward.

Stress – stress is a common motivation for people to begin using drugs that they think will offer an escape, even if only momentary.

Side Effects of Synthetic Marijuana

Even with the limited knowledge gained from a few studies on the effects of synthetic cannabinoids on the brain, the scientific community appreciates that because they bind more strongly to the same cell receptors affected by THC, they produce stronger and more unpredictable effects. Added to this is the fact that most synthetic cannabinoid products have unknown chemical compositions that change all the time to avoid regulation. Some of these effects are similar to those produced by natural marijuana:

Short-Term Side Effects of Synthetic Marijuana

The downside, however, is that these much sought-after effects have undesirable side effects, mostly depending on whatever unknown substance is present in this unregulated drug:

Long-Term Side Effects of Synthetic Marijuana

Because there are limited studies, the long-term effects are not fully understood, other than what poison center experts report – that synthetic marijuana use can be life-threatening in the long term.

John W. Huffman was an organic chemistry professor at Clemson University back in the 1980s. In 1984, he led a team of researchers and began working on cannabinoids, a class of chemicals found in marijuana. His work was backed by generous grants from the National Institute of Drug Abuse (NIDA), and over the next 20 years has developed more than 450 cannabinoids that can mimic the effects of THC, the principal active component of real marijuana. The ultimate goal of his research was the development of pharmaceutical products that would target the endocannabinoid receptors in the body, particularly CB1 and CB2.

While there are other synthetic cannabinoid families (AM-xxx, JWH-xxx, HU-xxx, CP-xx), the JWH family of compounds figured prominently in the blame-game that ensued when synthetic marijuana products began flooding the U.S. market late in 2008, back when there were no DEA or FDA regulations in place.

The German pharmaceutical company THC Pharm reported that in at least 3 versions of the herbal blend Spice (which has been selling as incense around the world since 2002 and was all over Europe by 2004), JWH-018 was found to be one of the active components. Germany then prohibited the use of JWH-018, only to discover some 4 weeks later that the new samples they obtained now contained JWH-073. Huffman believes that of the entire JWH family of compounds, JWH-018 is the most widely used as it is more potent than most and is easy to make.

In 2011, testing laboratories began developing LC/MS/MS screening and confirmatory testing for detecting synthetic cannabinoids in response to their increasing prevalence in the American workplace. Employers initially began requesting testing for synthetic cannabinoids due to reasonable suspicion and accidents in the workplace, but by 2012 after the results started showing a trend, the tests were expanded to include pre-employment drug testing and random drug testing and JWH-073 has since been replaced by new synthetics.

The exact chemical make-up of synthetic cannabinoids keeps evolving. As more individual compounds are banned by the federal government, underground chemists simply replace them with something else.

More and more high profile corporations (mining, oil & gas, railroads, etc.) include synthetic panels in their workplace drug testing programs and it looks like these programs will only strengthen over time, considering that the manufacturers of these synthetic compounds have so far managed to stay 1 step ahead of the law.

Does DOT test for spice?

At this time, DOT doesn’t test for spice. It only tests for the drugs below according to 49 CFR Part 40 Subpart F.

However, DOT does not prohibit motor carrier employers from carrying out their own drug testing programs and policies. As such, any employer can require testing for other drugs of abuse not listed above such as K2/spice.

For more information, read here: Which substances are tested?

What Can Cause a False Positive for K2/Spice?

Somebody asked this question on Drugs.com. Based on the answers of respondents, it seems like the culprit for a K2 Spice false positive is the combination of Lamictal and Gabapentin.

Lamictal is an anti-epileptic medication. It is also used for delaying mood episodes in people with bipolar disorders.

Gabapentin, on the other hand, is a prescription anticonvulsant medication for epilepsy and postherpetic neuralgia.

What you can do?

If you’re taking any of these medications, we strongly suggest you inform the technician prior to drug testing.

Read more here: DrugScreen: What Can Cause a False Positive for K2 Spice?

Will Spice Show up on a Probation Drug Test?

Yes, spice will show up on a probation drug test if they use a K2 Spice drug test strip.

How Long Does Spice Stay in Your Urine?

Spice can be detected in urine for up to 72 hours.

Read more here: Taking Your Drug Test + K2/Spice – What You Need to Know

Is There a Urine Test for Spice?

Yes, there is a urine test for spice. Here at 12 Panel Now, our K2/Spice Urine Test Strips can provide you with 99% accurate results. They’re safe, reliable, and easy to use too.

What Schedule Drug Is K2?

Spice is a combination of different types of herbal mixtures that mimic the effects of THC.

Because the chemicals that are commonly used for creating spice have a high potential for abuse but no medical benefit, the Drug Enforcement Administration (DEA) has designated them as Schedule I drugs.