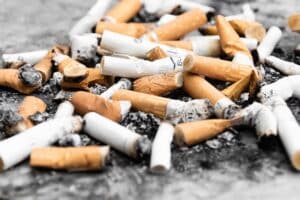 There are over 4,000 chemicals found in tobacco products and nicotine is one of them. Nicotiana tabacum, the type found in tobacco plants, is a naturally occurring colorless liquid chemical that directly acts on the brain. When burned, this chemical turns brown and emits the odor of tobacco. As an alkaloid, nitrogen-containing chemical, nicotine may be synthetically produced.

It is easily absorbed through the mucosal lining of the mouth and nose and skin. It goes to the lungs through inhalation, which is the quickest way for the drug to reach the brain, activating the “reward pathways” and thereby increasing the dopamine levels. It will only take 10 seconds of cigarette inhalation to reach peak levels of this drug, and quickly dissipating causing the user to continue to smoke throughout the day.

As an antiherbivore chemical, nicotine found in tobacco products is also used extensively as an insecticide.

Nicotine is not an illegal substance, however, there are Drug Tests available that are used when screening for this substance.  One of which is a Cotinine Drug Test.  Cotinine is a chemical that is made in the human body after exposure to nicotine.  Are employers screening their workers for nicotine? Not usually. Some specialized fields have established their own policy regarding non-smoking, however, nicotine is not usually indicated on a standard Panel Drug Test. Can an employer legally refuse an applicant who is a smoker? Information from chron.com states:

“Employers also cannot discriminate based on personal characteristics such as weight, marital status or disability. However, there is no federal law declaring smokers as a protected class. In addition, some states offer no legal protection for smokers, allowing employers to establish any kind of anti-smoking restriction or policy they want without the fear of a discrimination claim.”

Screening Cut-Off and Detection Time
It must be understood that tobacco is not the only source of nicotine. This chemical is naturally found in nightshade plants such as eggplants, tomatoes, potatoes, green peppers, and coca plant leaves.

DEA Drug Class
Nicotine is addictive and can be toxic if taken in high doses. However, nicotine is not a controlled substance under the US Controlled Substance Act. As early as 1964, the US Surgeon General stated that smoking is linked to heart disease and lung cancer. Nevertheless, it wasn’t until 1994 that the US Food and Drug Administration supported the issue that nicotine is addictive. In connection, the US Supreme Court ruled that the FDA has no right to regulate nicotine as a drug. In 2009, the Family Smoking Prevention and Tobacco Control Act gave the FDA the authority to control the manufacture and trade of tobacco.

What Type of Drug is Nicotine?

Nicotine, found in cigarettes, cigars, snuff, pipe tobacco, and chewing tobacco, is highly addictive. It is easily absorbed in the bloodstream when the tobacco product is smoked, inhaled, or chewed. Nicotine stimulates the adrenal glands to release epinephrine or adrenaline. Epinephrine increases respiration, blood pressure and heart rate as this hormone stimulates the central nervous system. Nicotine is similar to heroin and cocaine in the sense that all three chemicals increase the levels of the neurotransmitter dopamine, thus affecting the reward and pleasure of brain pathways.

Nicotine is available in various products that contain tobacco. Such products contain different levels of nicotine but no amount is too little to render this substance harmless.

Nicotine patches contain a sizeable amount of the substance in order to facilitate a continuous delivery for hours. Severe toxicity may happen if the patch is ingested.

E-cigarettes – Also called e-liquid or e-juice, e-cigarettes are a battery-powered device that vaporizes liquid nicotine. The concentrated nicotine is sometimes flavored and packaged in a 30 ml to 4 liters container

Dissolvable Tobacco – This is a fairly new tobacco product that comes in sticks, strips, compressed tobacco, and orbs. They look like candies, spit-free and smoke-free.

Hookah – This is a device made of pipe, a water bowl, and a hose used to smoke a combination of vegetable/fruit and tobacco (shisha). The tobacco is heated using charcoal or a Bunsen burner to deliver about 100-200 times the volume of inhaled smoke from a cigarette.

In the past, low doses of nicotine were used to treat a variety of ailments from migraine to intestinal symptoms. A high dose of nicotine is lethal in that it has been used as an insecticide. Studies indicate that there are many possible medical uses for the highly stigmatized nicotine. Pharmaceutical drugs with nicotine as their primary ingredients were developed for clinical trials in the treatment of depression, schizophrenia, depression, Alzheimer’s disease, ADHD, anxiety, Tourette syndrome, and other disorders.

It has been observed that people with schizophrenia, adult ADHD, and depressive–spectrum disorders tend to smoke heavily, prompting researchers that nicotine seems to soothe or diminish symptoms.

Nicotine also tends to improve the motor and cognitive functioning in people with Parkinson’s disease and Alzheimer’s disease. The theory is that nicotine increases the release of neurotransmitters diminished in those two diseases.

Studies are underway to determine the efficacy of nicotine as a pain reliever and postoperative analgesia.

Currently, nicotine is now being used as an aid in smoking cessation called nicotine replacement therapy or NRT. The premise of this therapy is to lessen the craving for therapy and provide relief from withdrawal symptoms when a person is trying to quit or cut down on smoking.

When taken for medicinal purposes, the prescribing doctor must know if the patient has:

Smokers know that tobacco use is harmful and most have the desire to quit or reduce using it. The truth is that out of the 35 million who wish to stop smoking each year, about 85% of them relapsed within a week.

The effects of smoking are serious as it can potentially harm all organs of the body.

Tobacco dependence or nicotine dependence simply means a person cannot stop using nicotine products even if he knows it’s harmful to him and those around him.

The substance produces not only physical effects but mood-altering changes in the brain that is pleasurable. The pleasure affected by using tobacco may prod the person to dependence. This drug affects the brain by:

Symptoms of Use and Abuse

It is easy enough to know if a person smokes. His clothes, hair, hands, and breath will usually smell like cigarettes. He might have a persistent cough that won’t go away. People who chew tobacco spits a lot, while those who use a flavored e-cigarette would probably smell sweet and fruity.

Withdrawal symptoms appear when a tobacco user stops its use. Symptoms may appear 30 minutes after the last hit. Some of the more common symptoms are:

Stopping smoking can improve one’s health no matter how long the person has used tobacco products.

Nicotine was isolated from Nicotiana tabacum in 1828 and was first synthesized by P. Crepieux and A. Pictet in 1904. However, the history of this drug dates back more than 2,000 years.

Native to the Americas, the tobacco plant has been used for medicinal and recreational purposes. Ancient carvings depicted Mayan priests enjoying a pipe of tobacco and have used the plant in sacred and healing rituals. Spanish conquistadors and travelers introduced tobacco for use in cigars and pipes.

In 1560 French ambassador Jean Nicot de Villemain sent tobacco and seeds from Brazil to Paris believing that tobacco had medicinal value. Nicotiana tabacum which is the Latin name for the tobacco plant was derived from his name Nicot. He sent powdered tobacco to Queen Catherine de Medici for her to sniff the snuff to cure her migraines. The Queen of France said the snuff worked and called it the Herba Regina, or herb of the queen.

The new Spanish colonies in North America became the prime supplier of tobacco leaves in the 1600s. The demand was so great that by the 1700s, slave trade between North America and Africa prospered as more plantation workers were needed in North America. Thus, the proliferation of tobacco was virtually unstoppable as local economies prospered with the trade.

In 1763, nicotine was used as an insecticide. In 1828, German chemist Karl Ludwig Reinmann and Dr. Wilhelm Heinrich Posselt isolated nicotine from the tobacco plant. Both scientists deemed it poisonous.

The ill-effects of tobacco consumption were recognized that by 1890, several US states banned the sale of cigarettes to minors. Today, nicotine comes in a variety of products.

Previous Methaqualone
Next Opiates
What you can find
Shopping cart
close