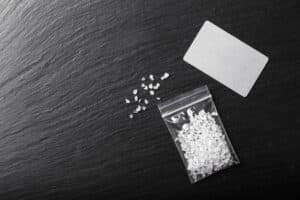 Methadone hydrochloride is a potent and long-lasting synthetic painkiller (analgesic) belonging to the opioid family of drugs. It was first synthesized in the late 1930s and has since been widely used to treat chronic pain, as well as people suffering from addiction to other opioids like heroin, hydromorphone (Dilaudid) and oxycodone (OxyContin).

Methadone figures prominently in the prescription drug addiction problem currently plaguing the U.S. A major contributor to this widespread use is its relatively low price compared to other painkillers and the liberality with which family doctors and other health care professionals prescribe it for all kinds of chronic pain.

Over 980,000 Americans are addicted to heroin. They suffer from painful withdrawal symptoms and are prescribed methadone for it. Methadone is a synthetic narcotic and provides morphine-like painkilling benefits. Drug treatment centers use it as part of their detox programs. In recent years, methadone was implicated in the overdose deaths of many teenagers and parents began questioning the virtue of administering a narcotic to heroin addicts. Its proponents argued that it is less addictive than morphine or heroin, and spares patients from the severe withdrawal symptoms from these drugs.

Just like any drug, screening for methadone is guided by clear cut-off levels that vary depending upon the type of sample used. There are also different cut-off levels for screening and gas chromatography-mass spectrometry (GC/MS) confirmatory testing because they use different testing methodologies.

The immunoassay tests done during initial screening are intended to detect a wide range of compounds that are chemically similar and that react with antibodies contained in the reagents. The GC/MS confirmatory tests on the other hand look for specific metabolites that identify and quantify a specific drug.

Methadone is classified under Schedule II of the Controlled Substances Act which lists drugs, substances or chemicals that have a high potential for abuse, the usage of which can potentially lead to severe physical and psychological dependence but with accepted medical uses. Drugs under this class are considered dangerous and require a prescription.9

Other examples of drugs that fall under this class include:

How Does Methadone Work?

Methadone is a depressant. Depressants are drugs that slow down the central nervous system, giving one a general feeling of relaxation, causing temporary relief from stress and anger. Methadone should not be used together with other CNS depressants (tranquilizers, sedatives, sleeping pills, phenothiazines, general anesthetics, alcohol, and other opioids) as it will increase the risk of profound sedation, respiratory depression, coma or death.

Methadone Forms and Routes of Administration are Oral and Injection

As a controlled prescription drug, methadone is indicated for the following legitimates uses:

Reduce withdrawal symptoms in people suffering from addiction to heroin and other drugs. Methadone does this without causing the “high” characteristic of the drugs that caused the addiction.

Relieve the pain associated with drug detox within the context of drug addiction treatment, detoxification, and maintenance.
Ironically enough, many people end up using methadone without medical supervision for the very same reasons they are used by legitimate addiction treatment centers. Being a depressant, many people use methadone, for its sedative effects:

Being a depressant, many people use methadone, for its sedative effects:

Inside the body, methadone is primarily metabolized into an inactive metabolite called 2-Ethylidene-1,5-dimethyl-3,3-diphenyl pyrrolidine (EDDP) by the methadone-metabolizing enzymes P450 CYP 3A4, 2B6 or 2D6. Some people are genetically predisposed to be poor or non-metabolizers, but a certain percentage of the human population are what can be called rapid-metabolizers of methadone.

Rapid metabolizers, regardless of their compliance with their methadone maintenance, will not show enough parent methadone in their urine specimen to constitute a positive drug screen. They will, however, show a detectable amount of its metabolite, EDDP. It is important to monitor these patients by establishing expected concentrations for the metabolism of methadone to EDDP. This is done by compiling urine excretion data from which proper medication (dosing) is established and toxicity is avoided.

Testing for EDDP instead of the parent drug methadone also spares these patients from being suspected of diverting their prescribed medication and being denied further doses.

Poor or non-metabolizers are those who are deficient in their methadone-metabolizing enzymes P450 CYP 3A4, 2B6 or 2D6, and will therefore not form EDDP from methadone. This is seen in a sample that detected a level of methadone but not EDDP.

It is important to note however that while it is a good indication of a non-metabolizer, not all “samples-with-methadone-but-no-EDDP” indicate a non-metabolizer. Certain factors like variable doses and the length of time that has elapsed after dosing can affect the test results. It may also be an indication of sample tampering by adding methadone to the urine, resulting in a false positive.

The human brain is almost entirely made up of nerve cells that communicate via neurotransmitters. Certain parts of the brain are responsible for our emotions, thought processes, speech and motor control. When neurotransmitters fail, a host of problems arise.

Methadone use can cause many changes in these neurotransmitters. The nerve cells whose job it is to regulate and produce pleasure messages work overtime. The body’s reward system will send a message to repeat certain actions that produce pleasure. This is exactly what methadone does. It causes nerve cells to produce more pleasure-neurotransmitters, creating a feeling of euphoria. And since methadone is a long-acting drug, this feeling of euphoria takes a while to wear off, especially after prolonged methadone use. Eventually, neurotransmitters are over-produced, destroyed, or lost, causing a chemical imbalance in the brain that will manifest into many of the following symptoms:

Most cases of methadone dependence involve people who are trying to stop and are under treatment for addiction to heroin and other opioids. This is because methadone is an established drug for the management of heroin withdrawal symptoms. In the process of medical detoxification from heroin, a person can become physically and psychologically dependent on methadone. This creates a vicious cycle of addiction, and while not as incapacitating as heroin, the person nevertheless is left feeling trapped.

People who use methadone for recreational purposes and without medical supervision will often show signs and experience symptoms that include the following:

With close to 100 million Americans suffering from chronic pain in addition to all the heroin and opioid addicts who are trying to stop, methadone finds its way into the lives of thousands of Americans from all walks of life. Many of these people are employed and may potentially be a source of concern for employers striving to maintain a drug-free workplace. For this reason, methadone is practically a standard test in multi-panel drug screens available in the market today. Any work environment can only benefit from having safety managers who are well-informed about methadone dependence and its potential effects on employees of concern, their peers, and their overall productivity and safety at work.

Side Effects of Methadone Withdrawal

People who are addicted to methadone will experience painful withdrawal symptoms within the first few hours that they’re off the drug. The relaxed, laid-back feelings go away and are replaced by:

It will initially feel like the flu, with muscle aches and pains that are followed by:

These symptoms don’t go away for several days, and the person will be so miserable that they feel an even greater need to take the drug, which often leads to a cycle of further drug use and then another temporary withdrawal, only to fall back into the habit once again.

Because withdrawal can cause pain, the user may feel an even greater need to take the drug. This can lead to a repeating cycle of temporary withdrawal and further drug use.

Methadone was first synthesized at the I.G. Farben laboratories in Germany in 1939 after long sustained research in the area of analgetics and synthetic antipyretics that began in the early 1880s. The compound that was later to be called methadone was originally named Va 10820.

Compound Va 10820 code-named Amidon, was given to the German Wehrmacht for further testing but was not used during the war. All known sources indicate that inadequate doses were used in the experiments, yielding unsatisfactory results.

After the war, patents, trade names, and other German research assets were distributed among the allies. The U.S. confiscated I.G. Farbenkonzern’s works. By 1947, Va 10820 or Amidon was given the generic name methadone and was approved as a painkiller in the United States. The first commercial production of methadone was by Eli-Lilly under the trade name Dolophine (from the Latin dolor (pain) and finis (end)).

Heroin addiction rose to epidemic proportions after the war and heroin addicts were committing crimes to get some money to feed their habit. Scientists at the Rockefeller Foundation developed a system of administering methadone to heroin addicts to prevent them from using it. The system used oral administration either by liquid dose or diskettes, effectively eliminating any chance for transmission of disease. When patients were able to successfully stop committing crimes, the system was deemed successful and from there methadone treatment for heroin addiction spread across the U.S. and beyond. By 1998 New York State alone had 44,000 methadone patients, over half of the 79,000 for the entire United States.

Is Methadone an Agonist?

Yes, it is. It’s a synthetic opioid agonist.

What Can Cause a False Positive Drug Test for Methadone?

Antihistamines and some sleep aids containing diphenhydramine (like Benadryl) could cause a false positive result for PCP or methadone. Doxylamine (the active ingredient in Unisom) can also trigger a positive drug result for methadone, opiates, and PCP.

Does Methadone Show up on a Drug Test?

Yes, it does. It can show up on multi-drug tests ranging from 10 Panels to 14 Panel tests as well as dip cards, mouth swabs, or a single panel methadone test strip.

Every company is different.  For instance, those who employ staff that will be operating machinery may screen employees differently than those in another field. Though Methadone is detected within most standard drug tests, it’s not on every test.

Does Methadone Show up on a 7 Panel Drug Test?

In most cases, one would have to use 10 Panel, 12 Panel, 13 Panel, and 14 Panel drug test cups, dip cards, mouth swabs, or a methadone drug test strip for Methadone detection.

How Long Does Methadone Stay in Your System?

Methadone can stay in your system for 2 to 13 days.

Does Methadone Show up on a 10 Panel Drug Test?

Yes, this morphine-like substance is detected on a 10 Panel drug test.