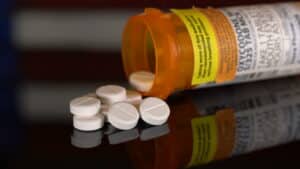 Oxycodone (Molecular Formula C18H21NO4)  is classed as a semi-synthetic opioid along with hydrocodone. The drug comes from the opium poppy but it is manufactured from codeine compounds (a natural opiate) instead of directly from the plant. Formulated to address moderate to severe pain, like all opiates, it is highly addictive.

Founded in the 1900s, doctors have been prescribing oxycodone after injuries or surgeries to ease pain and discomfort. For years, the drug’s addictive characteristic was played down, with various medical groups and associations promoting the drug for excellent pain management. It wasn’t years later that the truth about the addictive quality of oxycodone became apparent. Today, medically supervised use of this drug is legal in the United States.

Tolerance to oxy can build up over time. The need for higher doses to address pain or to achieve feelings of euphoria can lead to addiction, and overdosing becomes a risk. Overdose can lead to serious health complications and even death.

The Drug Enforcement Administration (DEA) is the implementing body of the Controlled Substance Act (CSA) and brings to justice all violators. The CSA regulates the manufacture, distribution, importation, distribution, possession, use, and trade of prohibited and prescription drugs. Under the CSA are five schedules of classification based on the medical use, safety, and potential for abuse of a particular drug.

Oxycodone falls under Schedule II which are drugs, chemicals, or substances with a high potential for abuse that could lead to grave physical or psychological dependence. These drugs are dangerous and must only be used under medical supervision.

What Type of Drug is Oxycodone?

Oxycodone is classified as a narcotic painkiller or opiate analgesia. It is often prescribed in severe post-operative pain or in combination with other medications for moderate pain.
It does not necessarily stop the pain but it does decrease discomfort and increases tolerance to pain.

Oxycodone is found in opioids such as Percocet, OxyContin, Percodan, and Endod. The drug is classified as an opioid because it was produced by the modification of thebaine, an organic compound found in opium. For clarification, an opiate is a drug (morphine, codeine) derived from the opium poppy while an opioid is a semi-synthetic or synthetic drug with opium-like qualities.

Tablet or capsule –Oxycodone comes in tablet or capsule form of various dosages. Some abusers crush the tablet or remove the capsule and swallow the powder for a stronger effect. Snorting powdered oxycodone results in a quick “rush” that goes straight to the user’s brain. As a form of medication, this is usually taken without food every 4-6 hours.

Extended-release tablet and capsule – This is taken every 12 hours with food. It could be sprinkled on food or poured into the feeding tube of a patient.

Solution –There are brands of oxycodone that are in liquid form and given intravenously or subcutaneously to patients for a more controlled and effective pain relief therapy. Abusers crush tablets, dissolve them in water or another liquid, and inject them into the user’s vein.

Liquid – This form of oxycodone may be mixed with juice to make it easier to swallow.

Oxycodone, classed as an opiate narcotic, works by changing the way the nervous system and the brain respond to pain.

It is prescribed for the relief of moderate to severe pain, more so in managing post-operative and cancer cases. Extended-release capsules and tablets are used to effectively relieve pain on a 24-hour basis on people in severe pain, and who cannot be treated with other pain medications.

People who can be treated with other pain medication are not good candidates for oxycodone. Concentrated oxycodone solution, as well as extended-release capsules and tablets, should be prescribed to people who are used to the effects of opioid medications.

There are oxycodone medications that contain aspirin (Percodan), acetaminophen (Percocet), and ibuprofen and these must be prescribed by a licensed physician as these drugs could interact negatively with other medications.

Side Effects of Oxycodone

Oxycodone is a powerful opiate that addiction to it is similar to heroin addiction. A person taking oxycodone as pain medication will soon develop tolerance to it. Pain that was manageable by a 10 mg dose may require a larger dose after a while. As a consequence, he may try to acquire this drug illicitly as he cannot get a larger dose from his doctor. The road to abuse and addiction starts. As opiate addiction is compelling by nature, an addicted person will easily undergo moral values deterioration; commit crimes; ruin careers and family relations.

The best way to determine oxycodone use is through a drug test. The following are symptoms of oxycodone (opioid) use.

Long-Term Side Effects of Oxycodone

Using oxycodone for a prolonged period can lead to tolerance, psychological and physical dependence, and addiction. Long-term side effects of oxycodone use and abuse can:

There are certain risks to taking oxycodone. The risks must be weighed against the benefits of taking the drug.

Allergies – People with allergic reactions to other medications, preservatives, food, dyes, and animals should inform their doctors before taking the prescription.
Children –There are no studies yet to indicate the safety and efficacy of oxycodone on children.
Geriatric – Studies indicate no geriatric-specific problems linked to usage. However, elderly patients with age-related liver, kidney, or lung problems should be monitored to avoid serious side effects.
Pregnant women – must not take this medication
Breastfeeding – Studies indicate that the breast milk of women on oxycodone is harmful to infants.
Medications – Certain medications have contraindication with oxycodone.

People with the following conditions should not take oxycodone or any opioids if:

Oxycodone use for even just a few days has the potential to lead to tolerance and dependence.

Oxycodone use for even just a few days has the potential to lead to tolerance and dependence. Tolerance develops prompting the person to increase his dosage. The penultimate step is psychological dependence and ultimately, physical dependence or addiction. Below are signs of opiate dependence:

Suddenly stopping the use of oxycodone will lead to withdrawal symptoms. Drug dependence on opioids should gradually be weaned off. Signs of withdrawal are:

The creation of oxycodone was just an afterthought when the production of heroin as a non-addictive opioid failed in the 1890s. At that time, heroin was marketed by Bayer, a German company.

Heroin was banned in the United States prompting two German scientists to synthesize oxycodone, believed to be a semi-synthetic, non-addictive alternative for morphine, heroin, and opium in 1916. By 1939, oxycodone was being marketed in the United States for pain relief. In 1950, a combination of oxycodone and aspirin was formulated. Called Percodan, this drug was dispensed by physicians. By 1963, Percodan was cited by the attorney general of California to be the cause of 1/3 of all drug addiction in the state.

By 1939, oxycodone was being marketed in the United States for pain relief. In 1950, a combination of oxycodone and aspirin was formulated. Called Percodan, this drug was dispensed by physicians.

In 1970, oxycodone was listed as a controlled substance in the United States. However, aggressive marketing of the drug for pain management led to a marked increase in the prescription of this drug in the last 25 years. The increase in the availability of this opioid led to its greater availability at the black market which led to bigger risks of medical complications and possible drug abuse and overdose.

What Can Cause a False Positive for Oxycodone?

The presence of Hydrocodone can cause a false positive on an oxycodone screening test.

However, positive results should be considered presumptive. It should be confirmed by GC/MS if requested by the client.

What Happens When You Mix Alcohol and Oxycodone?

Combining alcohol with Oxycodone is dangerous.

It’s because both drugs function as central nervous system depressants.

Consequently, the combination of alcohol and Oxycodone is likely to cause respiratory depression. It’s a condition characterized by minimal breathing or no breathing at all.

Can You Take Gabapentin with Oxycodone?

If they do so, however, they may suggest some modifications.

Can You Take Oxycodone with Ibuprofen?

No. One study tested Ibuprofen alone vs. Ibuprofen in different combinations.

However, only the 10 mg oxycodone combination was better than the others after 2 hours.  Consequently, at 3-6 hours, there was no difference in pain among the groups.

Additionally, those who took Oxycodone did have more nausea, vomiting, and drowsiness.

How Long Does Oxycodone Stay in Your System?

Oxycodone is detectable in the urine for 1-4 days for up to 48 hours.

Its half-life is 3-5 hours. It takes about that much time for half of the dose to be eliminated from the bloodstream.

Is There a Difference Between Oxycodone and Hydrocodone in a Drug Test?

Both Hydrocodone and Oxycodone are opioids.

However, drug tests detect them differently.

An opiates immunoassay drug test may detect semisynthetic opioids. Oxycodone metabolizes oxymorphone. On the other hand, Hydrocodone breaks down in small amounts to hydromorphone.

Does Probation Test for Oxycodone?

Yes, in some cases, probation tests for oxycodone.

The National Institute on Drug Abuse states that “Probation and parole agencies should not be limited to testing only for the five drug classes specified by NIDA.”

Is Oxycodone a Controlled Substance?

Yes, oxycodone is a Schedule II drug. This means it has a high potential for abuse. Its use can also lead to psychological or physical dependence on the drug.

Does Oxycodone Show up on a Drug Test for Opiates?

No. Standard drug tests do not differentiate opiates. You’ll need to use assay-specific oxycodone.