Home » Blog » Will Vaping Cause Me to Fail a Drug Test?
Blog

Will Vaping Cause Me to Fail a Drug Test?

There’s no denying the surge of popularity with Vaping – especially within the past decade or so.  These battery-powered devices are almost everywhere to be seen and smelled.  Many of today’s popular e-liquids have grown beyond the traditional smoky tobacco and have progressed to less obtrusive flavoring like Strawberry Watermelon POP or even Pink Lemonade Risky.

With these seemingly harmless and admittedly delightful flavors, it’s no wonder why e-cigarettes are the most commonly used forms of tobacco among America’s Youth today.  Are these devices as harmless as they appear? Some speculate that vaping does not seem as hazardous as traditional cigarette smoking. If that is true, how harmful can these vapors really be?

Firstly, it’s important to understand the Mechanism behind how e-cigarettes, e-vaporizers, and other electronic nicotine system works.

When it comes to Vaping, the device used is known as a Vaporizer – this is an inhalation device.  There are three components to these devices: The battery, atomizer, and the e-liquid. These battery-powered devices are roughly the size of a conventional cigar or larger.  Although with the increasing popularity, some devices are becoming smaller. When the user puffs on the device, it activates the component (atomizer) that heats or vaporizes the replaceable liquid inside.  The user then is able to inhale the vapors produced and so begins the cycle.

Within the category of Vapes, there have been different designs throughout the years.  Cig-a-likes are the first generation devices, only to be followed by Vaping Pens. Since then, Vaping Mods – or Vaping Devices with Modifications. They have been taking the vaping market by storm.  A popular modification of the device has maximized energy flow by incorporating a larger battery.  Resulting in bigger clouds. Bigger clouds mean more nicotine being produced.

What’s Inside the Vaping Substances?

In order to determine the short and long term effects of Vaping, it’s important to understand what exactly is inside the Vaping Substances.  According to http://guide.heavengifts.com/ the three main e-liquids used today fall into these categories are…

Nicotine – Nicotine is commonly used in e-liquid flavors to resemble the taste of conventional cigarettes.  Some who are struggling to quit smoking by helping to gradually lower their nicotine levels have opted to use these e-liquids in their e-cigarettes.

Cannabidiol – CBD Liquid – commonly known as CBD – is actually a naturally occurring component found within the Cannabis plant.  Within the Cannabis plant exists THC and CBD. CBD, however, doesn’t give you the euphoric effect that THC gives you. If you are expecting to get high from CBD, you most likely will not.  Junella Chin, DO, an osteopathic physician and a medical cannabis expert for cannabisMD states regarding the effects of CBD states that “CBD is the non-psychoactive portion of the plant, so what that means is you won’t have any effects like euphoria.”  She goes on to say: “You won’t feel sedated or altered in any way.”  Some of the benefits of CBD have been reported to alleviate stress and encourage calmness.

Tetrahydrocannabinol – This is the primary component of Cannabis and is the main ingredient that is responsible for the psychedelic effects. Some users refer to the feeling created by vaping this as a “clean and healthy high”.

According to the information from the Surgeon General via surgeongeneral.gov, the components of an e-cigarette (ultrafine particles, nicotine, and volatile organic compounds) can all pose serious health risks for adolescents and adults.

For adolescents, it is more likely that they will develop a form of addiction if regularly engaging in the use of electronic cigarettes or vaping devices.  Information from surgeongeneral.gov mentions:

“Until about age 25, the brain is still growing. Each time a new memory is created or a new skill is learned, stronger connections – or synapses – are built between brain cells. Young people’s brains build synapses faster than adult brains. Because addiction is a form of learning, adolescents can get addicted more easily than adults. The nicotine in e-cigarettes and other tobacco products can also prime the adolescent brain for addiction to other drugs such as cocaine.”

They go on to mention that e-cigarettes are linked to the use of other tobacco products as well as other substances like alcohol and marijuana.

Vaping, though recently popular is not a new concept.  It has been reported that certain forms of Vaping can be traced back to ancient times.  Of course, electronic e-cigarette devices weren’t available prior to this century. However, the practice of inhaling herbs in the form of vapor can be found even as early as the ancient Egyptians.  Vaporplants.com reports regarding this topic:

“They would set up a bed of super-hot stones and place plants or seeds on top of them. People would congregate around these stones, and allow the vapors to engulf them. Herodotus, during the 5th century BC, had written accounts of this ancient practice that seems to be rooted in Ancient Egypt”

According to casaa.org, the first patent granted for an electronic cigarette was recorded in 1930 to a Joseph Robinson. However, this was never commercialized and it isn’t clear whether a prototype was ever built, or if anyone intended to mass-produce it at some point.

Casaa.org further explains events in a more current timeline, citing milestones in vaping history such as:

The 1990s: Numerous patents for nicotine inhaler devices were filed throughout the 20th century and early 2000s by both tobacco companies and individual inventors, with a flurry of activity in the 1990s. Many relied on evaporation or physical propulsion, but a few were fairly similar to modern e-cigarettes

2003: What would become the first commercially successful electronic cigarette was created in Beijing, China by Hon Lik, a 52-year-old pharmacist, inventor, and smoker. He reportedly created the device after his father, also a heavy smoker, died of lung cancer

Will I Pass a Drug Test?

Does vaping show up on a drug test? Though many consider Vaping as a more healthy alternative to smoking, many wonder how they will fare on a drug test.  As previously mentioned, e-liquids can contain either Cannabidiol, Tetrahydrocannabinol, and Nicotine.  Knowing this is important when considering your test results.

Most people wonder will vaping CBD show up in a drug test. When it comes to Cannabidiol, most drug tests are not designed to test for it.  Of course, there is always a chance of it registering if the user has consumed a large amount of it prior to the test – it is a natural component of the Cannabis plant after all.

Vaping with e-liquids that contain Tetrahydrocannabinol may prove a different obstacle when trying to secure a negative Drug Test result.

Why? Well THC, unlike CBD is a common substance that a majority of Drug Tests are designed to detect. Moreover, when taking a Urine Drug test, it is important to know that THC can, in fact, remain in your system – showing up in your urine for up to three months or more.

Depending on how much you vape, Urine Drug Tests can show signs of Nicotine usage from certain nicotine e-liquids for up to three weeks.  There are certain variables to consider. For instance, not every e-liquid contains the same amount of Nicotine. Some contain larger amounts that may increase your chances of a positive read.

If you or someone you know is concerned about whether they will pass a Urine Drug Test, the best way is to see your results firsthand.

What Drug Test Will I Be Taking? 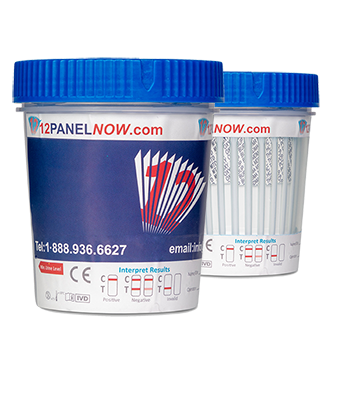 If you notice, THC, a common ingredient in many e-liquids is listed, however, Nicotine is not part of the standard 12 Panel Urine Drug Test.  This isn’t to say that Employers do not test for this. Nicotine, though listed by the FDA as an addictive chemical, is under different regulations.  Tobacco is legally sold in every country of the world and is not currently listed as an illegal substance in the United States. There are many tests available to determine Nicotine levels, both in blood and in the urine. 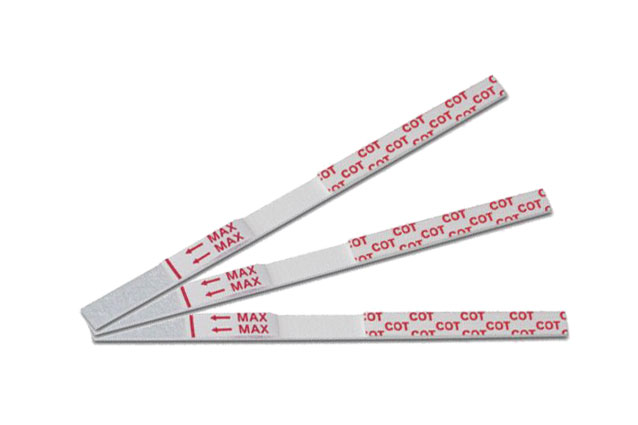 An employer may decide to test an applicant for Nicotine and make hiring decisions based on the results.  A popular, accurate test used in these circumstances is the Cotinine Test Strips (Tests for Nicotine in Urine).  Cotinine is an alkaloid found in tobacco and is also the predominant metabolite of nicotine.  These tests are fast and accurate so it’s important to consider your consumption if you wish to receive a negative result.

Though Vaping is more popular than ever, the ingredients within the e-liquids used in the Vaporizer devices are in fact enough to show a positive reading on Urine Drug Tests. Especially if the user is regularly vaping and consuming these substances.  As mentioned, if you or someone you know is concerned with your test results, the best way to find out how you will fare is to take one of the listed Drug Tests in the convenience of your own home.

If you wish to purchase one of our 12 Panel Urine Drug Test, or our Cotinine Test Strips from 12 Panel Now, use our special promo code: DISCOUNT1119 during checkout to receive a special discount! ($10 OFF purchases of $50 or more!)