Home » Blog » Panel Drug Test: Which Should You Choose?
Blog

Panel Drug Test: Which Should You Choose?

Among the different drug testing methods, urine screening is the most utilized. This is due to its efficiency, speed, ease of collection, and affordability.

Urine drug testing is the most common method of drug testing because it is non-invasive, inexpensive, and can be collected even by non-medical personnel.

But how do you choose the right number of panels?

The term “panel” refers to a drug or family of drugs included in a drug test. The more panels a test includes, the greater the scope of the test and several factors influence the right choice when it comes to which panel drug test will work best for your needs.

You have to consider what industry you’re in, what laws apply to your industry for drug testing, state laws and even corporate culture, corporate policies, and current trends.

What choices do you have?

Instant urine drug screening is an effective tool for drug misuse as part of a comprehensive program. When you decide to test your employees or students for drugs and alcohol, you have several different choices to make.

Will you use random testing or you will test all of the employees? Which panel of drug tests would you like to use? Where will you perform testing?

Certain industries do have requirements.

In the healthcare space, we can focus more on testing for non-illicit drugs since employees have access to prescription medications that they might be abusing.

So, as you can see it all depends on the industry actually.

What is obvious is that you should use different panels for different job types. For example, if you have construction workers, that means that they have more risk of injury and they need a more comprehensive drug test panel to make sure they’re not potentially at risk of serious injury. But for your executives, maybe it’s less concerning and maybe you only need to to make sure they’re not using certain drugs, like cocaine.

Also, we have to make sure about drug testing state laws since every state has its unique specifics, which is why it’s important to work with a reputable drug screening vendor that understands and complies with all the various laws. And laws, as you know, change. For example, a current issue is how to handle medicinal and recreational marijuana. Every state has different standards about what happens in those situations.

Businesses certainly can benefit from having drug testing in place because it promotes a healthy and safe working environment, also you can see increased productivity, and lower costs of covering accidents and health-related issues.

So what are your options?

Below is a chart of the different multi-panel drug screens and the illicit substances they detect. 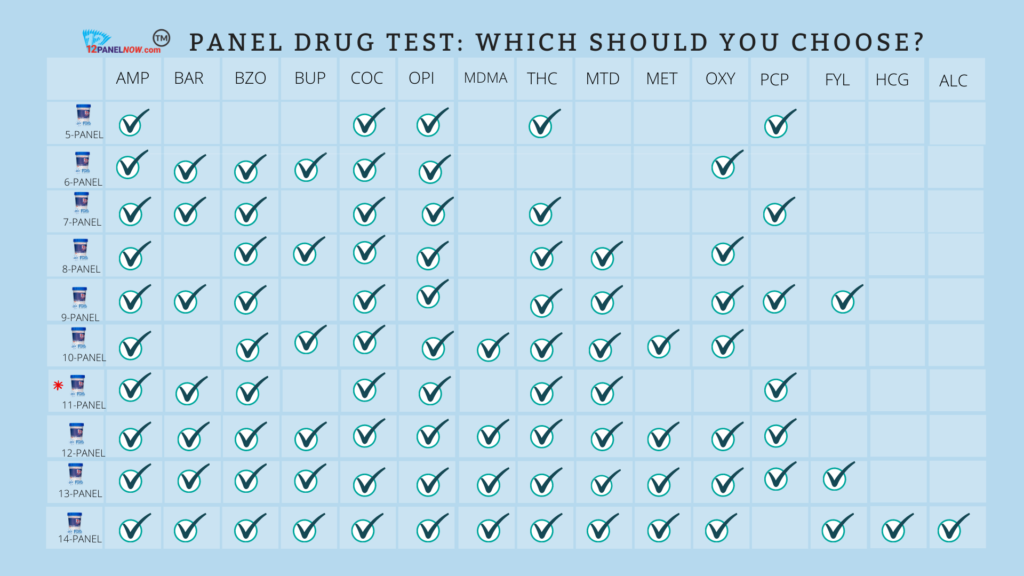 Panel Drug Test: Which Should You Choose?

The standard 5-panel test cup is the most popular of all the drug screens. As we said, the Department of Transportation (DOT) and plenty of companies use it to detect the following substances:

Although this cup is the most popular in the industry, companies often use tests with more panels.

For some organizations, testing for ten or eleven substances is not enough. They want to be more thorough. Examples are private companies that offer safety-sensitive services like drivers, hospital workers, among others.

This drug test screens for as many as fourteen substances.

Do you need top quality drug screens? Visit the 12 Panel Now Store. We have a huge array of drug testing supplies for your every type of need.

Tags:
panel drug test
Newer5 Panel or 10 Panel Drug Test: Which Is Better?
Back to list
OlderShould we change how the brain interprets pain?